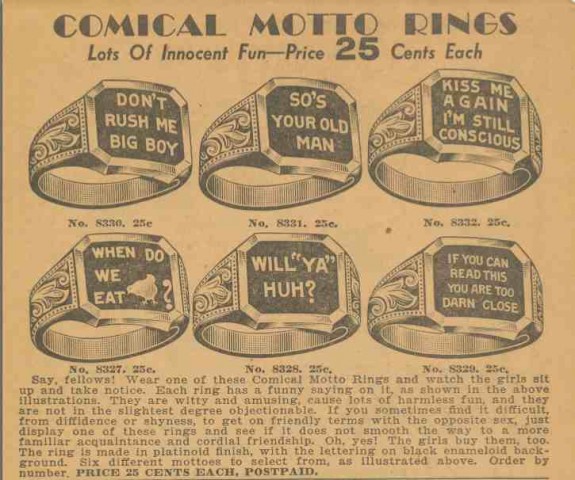 Did showing a woman your "Kiss me again I'm still conscious" ring really help you score, even in 1950?


Comments
You young whipper-snappers are missing the whole point of these 25¢ rings. As we older, wiser men of the world will remember 25¢ usta be called two-bits and one of the worse things you could accuse a woman of was being a "two-bit whoore" so, these rings offered men two-bits of innocent fun thereby sparing some undeserving young woman of serious social embarrassment.

The rubes were so green back then that just about anything other than the corn dying, the crick overflowin' or the cow going dry was funny.
Posted by Expat47 in Athens, Greece on 06/17/13 at 09:59 AM

There was a great skull ring in the girl's comic from last week in some obscure, never heard of before metal - eternium (IIRC)
Posted by dumbledoor on 06/17/13 at 10:00 AM
I would have bought one that said, "Would You Believe I Paid 25 Cents For This?"

DD, I discovered a new element when I took on old cars as a hobby - Unobtainium.
Posted by KDP on 06/17/13 at 11:02 AM
Why pay for 4 years of college, or even graduate high school, when you can get a cool ring and great conversation piece for 25 cents? 😊

Both my high school and my college tried to sell me a "class ring"...
Posted by girlgeniusNYC on 06/17/13 at 11:07 AM
I have a reproduction 1929 JS catalog, and they had the same rings with the same slogans.

anything other than the corn dying, the crick overflowin' or the cow going dry was funny.

The funniest thing in the catalog was "The Dying Pig," which you inflated and then let deflate. It was said to make a very realistic dying pig sound as it did, and this was considered the height of wit. Even if the only way to get the joke was to know what sound a pig makes while dying. I find the idea of a bunch of adults getting hours of amusement inflating a toy pig even funnier.
Posted by Bill the Splut on 06/17/13 at 12:03 PM
Just the way people amused themselves before TV brought us 300 channels and HD.
Posted by Patty in Ohio, USA on 06/17/13 at 08:45 PM
I have on of these rings! It belonged to my great grandmother and I've had it on my keychain for years but didn't know anything about it and can't seem to find anything when I google it.
Posted by janell on 06/22/13 at 03:41 PM
Commenting is not available in this channel entry.