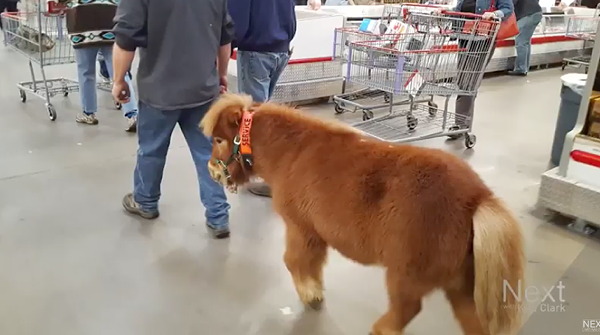 
Comments
That doesn't make sense. If it was about weight, horses, even miniature ones, are far heavier than most of the other service animals. If it was about being trained, a good capuchin monkey is as capable of behaving as any trained service dog, if not more, and horses are not better than trained rabbits. Also, horses can and will block the way unless they are travelling first class, and even then, you will need a real nice first class with lots of space between the seats. If they accept horses and cats, I don't see why they wouldn't accept trained monkeys, sugar gliders, rabbits, hedgehogs and ferrets. As for the smaller rodents and insects, I guess the plane's atmosphere could make them sick, and for the spiders and snakes, there is a not negligible chance that they might cause panic in the plane.
Posted by Yudith on 08/21/18 at 11:56 AM
Service horses do really exist. There was an article in the WSJ years ago about a service horse that dropped a deuce on a plane in flight. They had to make an unscheduled landing to clean the plane.
I can't imagine a service cat. Can cats be trained at all? Although, if that's SW's entire policy, they missed banning a therapy cat.
I agree that several types of monkey would be as good as or better than any other animal at it. Surely they exist.

My parents kept horses, American Quarters, as a hobby. No more than two at a time as they were for riding with a horseman's club they belonged to based in the Sierra Nevada mountains. However, as gentle as they were, they were still large animals with a brain the size of a walnut and unpredictable when startled. Over the years, as a young one, I've been on the receiving end of a swift kick or two and you don't appreciate that the rocks that they have at the end of their legs can inflict serious bruising until it happens to you.

Emotional support animals are the biggest scam against the stupidest law we've ever been flummoxed into.
Posted by RICK on 08/21/18 at 06:50 PM
Miniature horses are used as guide animals for people with visual impairments. The advantage over guide dogs is that they live a lot longer, and the costs of training a guide animal are substantial (as is the time needed for the animal and its owner to get used to one another). At a conference I went to I met a woman whom I knew had a guide horse. She said she hadn't brought it to the conference because she said it would be hard for it to stand around all day.
Posted by ges on 08/23/18 at 09:18 AM
They may live longer than dogs, but at least dogs are not psychotic. I've never encountered a horse which I could trust out of my sight. Miniature or not, get it the eff out of striking distance or it will go wrong.
Posted by Richard Bos on 08/24/18 at 02:20 PM
@Richard: In my experience, both small dogs and ponies are a bit psychotic. I wonder if they will would allow my therapy Clydesdale stallion on board.
Posted by BMN on 08/24/18 at 06:32 PM
I should mention he is smaller than his brother and so is miniature.
Posted by BMN on 08/24/18 at 06:41 PM
Small dogs, yes. Guide dogs tend not to be chihuahuas, though.
Posted by Richard Bos on 08/26/18 at 03:22 AM
I've seen a guide dog that was a poodle, presumably because of allergy issues. It was a standard poodle, which is a medium sized dog.

I'm sure that animals of whatever species that have bad temperaments flunk out of guide school.
Posted by ges on 08/26/18 at 09:37 PM
Commenting is not available in this channel entry.