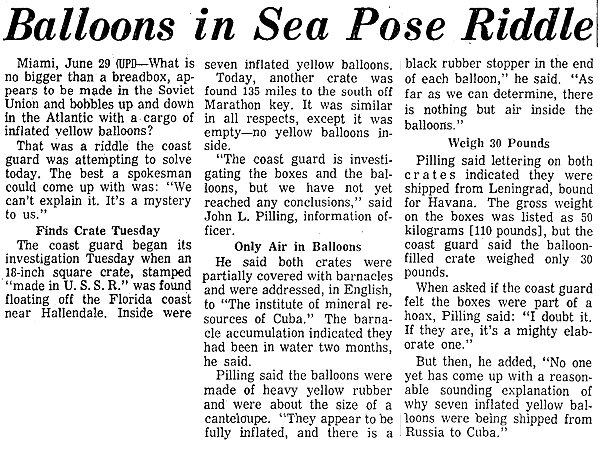 
Comments
Well, Dah! The ship carrying them, obviously, became yet another victim of the Bermuda Triangle.
Posted by Expat47 in Athens, Greece on 10/10/14 at 09:45 AM
"Why were the Soviets shipping seven balloons to Cuba?"

How about these were the forerunners to the "Beer Ball"?

From the description they sound more like buoys to me.
Still, it sounds hoaxy to me. They said the packages were addressed in English, why? The people writing the address were Russian and the people reading the address were Cuban. :lol: :coolsmile:
Posted by Tyrusguy on 10/10/14 at 12:34 PM
Was evil plan by Natasha and Boris to blow up Florida. Ask RJ about it, he should have picked up on it.
Posted by Expat47 in Athens, Greece on 10/10/14 at 12:37 PM
My guess is the balloons were packing.

Air pillows are basically balloons on a roll. From the Palmer website: "AIRplus® air pillows conform to the weight and shape of an object, supporting and cushioning against vibration and shock, making them highly effective in a wide variety of applications." http://www.palmerpackaging.com/airplus.html

So -- my guess -- someone in USSR wanted to cheap out on shipping costs. Instead of paying for special handling and air freight for delicate meters, they just shoved them in a crate, cushioned them with balloons, and sent them via common carrier (being marked for weight and addressed in English were required for common freight passing through Western ports).

It was an added bonus they got to laugh at the silly Americans who don't know the tricks.
Posted by Phideaux on 10/10/14 at 04:11 PM
"Was evil plan by Natasha and Boris to blow up Florida"

Knowing them, they probably sent the bombs to Frostbite Falls, Minnesota by mistake. I'm sure Fearless Leader was not pleased.
Posted by Rocket J. Squirrel on 10/10/14 at 04:43 PM
It's a good thing I no longer need things like balloons .. Older women were always my thing .. Right Patty ?

P.S. Can you get me some more Viagra from your Pharmacy please ??
Posted by BrokeDad in Midwest US on 10/10/14 at 07:29 PM
Could have been a joker who decided to remain anonymous for fear of getting in trouble.
Posted by Patty in Ohio, USA on 10/10/14 at 07:31 PM
The part of women you like best are not balloons, they just look like balloons sweetie. 😜
Posted by Patty in Ohio, USA on 10/10/14 at 07:42 PM
Phideaux -- I think that's the most likely explanation. Except if they were padding, where was the meter or gadget they were cushioning? Perhaps someone took it out of the box (stole it), sealed the box back up and then tossed it into the sea.
Posted by Alex on 10/10/14 at 07:54 PM
More strange stuff finding a ending point in weird Florida.

Now a few years ago the aging remains of The Bay of Pigs invasion force, (the bungled 1960 CIA operation), staged a re-enactment on Elliot Key in Biscayne National Park Florida. They came dressed in the latest combat fashions with loaded assault rifles and stormed ashore with video cameras rolling. The single park ranger on the island prudently called the Coast Guard and they arrested the lot of them backed up by a couple of armed Cutters. The Federal Judge was not amused and found them all guilty of several things, fined them and took away all their guns. He was accused of being a commie from some segments of the Miami community.
Posted by Gator Guy on 10/10/14 at 08:13 PM
@Alex -- Whoever unpacked them was on a pier or ship and just tossed the crates into the water rather than dealing with them, or the "Institute of Mineral Resources" used the ocean as a landfill.

If the balloons were about eight inches in diameter, they'd fit four to a layer, put in the device, and put another four on top. That would cushion and keep centered an item which is from three to twelve inches wide, two to four inches thick, and up to a foot long in a box 18x18x18.

Someone took the top off one box, removed the top layer of balloons, took out the item, and kicked the crate overboard. The other balloons escaped while the crate was in the water. That explains the empty crate.

For the second crate, since they knew how the items were packed, they only pried up the lid far enough so they could puncture one balloon and remove the item. That leaves seven balloons, and since the crate still had it's lid mostly in place, the balloons stayed in.
Posted by Phideaux on 10/11/14 at 03:30 AM
There is a simple solution for them being at sea. I agree with Phideaux that the baloons were packing.

-The Scientists got the janitor to open the crates and haul them away.
-Since they are nice crates he replaces the lids. If he can sell them, the lids may be useful.
-The captain of a fishing boat buys the crates to take his catch to market.
-The crates are not properly lashed down and a rogue wave takes them overboard.
Posted by BMN on 10/12/14 at 02:10 PM
In case anyone was wondering about Gator Guy's Elliott Key Bay of Pigs reenactment story (like I was), there's another account of that story about half way down this page from The Sun Sentinel, apparently titled "Ranger in Paradise" from 1988: