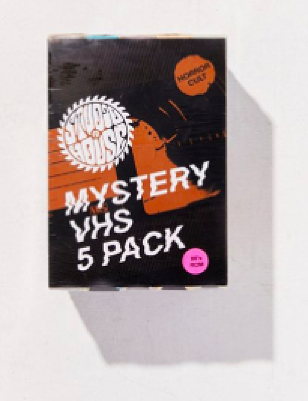 
Comments
Or you could go down to the local thrift store and get 80 tapes for $40
Posted by S. Norman on 02/20/19 at 07:15 AM
For a real mystery, they should have scoured garage sales and rummage sales, buying all the old home-recorded tapes they could find. Would it be a wedding at the VFW hall, someone's graduation, a high school student's project film . . . ? They could award prizes to those who used clues on the tapes to figure out when/where they were made, extra points for identifying the people.
Posted by Phideaux on 02/20/19 at 09:33 AM
Believe it or not, I still have a few boxes of BETA format tapes and a player stashed away. I'm not sure if the payer still works but I still have them. How long before Mystery DVD Packs are offered for sale?
Posted by KDP on 02/20/19 at 11:47 AM
@KDP -- Until fairly recently, so did I. It was when I learned there's no longer a reliable supply of parts that I copied all the tapes to disk and sold the machine.

Digiview Entertainment put out some nice little DVDs -- four movies on one disk for the awesome price of $1. I don't know if they did a general mystery one, but I have their Alfred Hitchcock (Jamaica Inn, Sabotage, The 39 Steps, Easy Virtue) and Sci-Fi Invasion (Cosmos War of the Planets, Assignment Outer Space, Voyage to the Prehistoric Planet, Warning from Space). All public domain, but the prints they used were decent. If I'd known the company was going to disappear so quickly, I'd probably have bought a lot more.

I've got a few hundred prerecorded VHS tapes. Most have only been watched once or twice, and many have never been watched at all and are still in their original shrink wrap. (When the Columbia Video Club first offered the Star Trek TNG series, I subscribed, and I have the complete series, but after watching many of the first season's episodes, I just didn't have the time to watch the rest, so they are still unopened.) I was also a good customer of Movies Unlimited, which mailed out catalogs the size of the old Sears Christmas wish books, and listed probably close to 20,000 titles from which to choose, in every genre imaginable. After VHS players became generally unavailable, I purchased a Panasonic combination DVD recorder-VHS recorder so I would still be able to play them if I wanted.
Posted by Fritz on 02/21/19 at 06:45 AM
Commenting is not available in this channel entry.