They're all the names of now defunct college bowl games. The Historical Dictionary of Football explains:


After the war, interest in sports increased. As a result, the years 1946 to 1949 saw a multitude of postseason college bowl games added. Many were not held for more than one or two seasons, and such games as the Alamo Bowl, Aloha Bowl, Angel Bowl, Bean Bowl, Cajun Bowl, Camellia Bowl, Cattle Bowl, Corn Bowl, Delta Bowl, Dixie Bowl, Fish Bowl, Fruit Bowl, Hoosier Bowl, Ice Bowl, Iodine Bowl, Kickapoo Bowl, Olympian Bowl, Optimist Bowl, Paper Bowl, Pecan Bowl, Raisin Bowl, Salad Bowl, Tobacco Bowl, and Turkey Bowl were played for the first and, in many cases, the last time. Others like the Tangerine Bowl (1946-1982), Cigar Bowl (1947-1954), Gator Bowl (1946-2011), Potato Bowl (1948-1967), and Refrigerator Bowl (1948-1956) originated during that period but lasted quite a bit longer.
Wikipedia has a list of even more defunct bowl games. 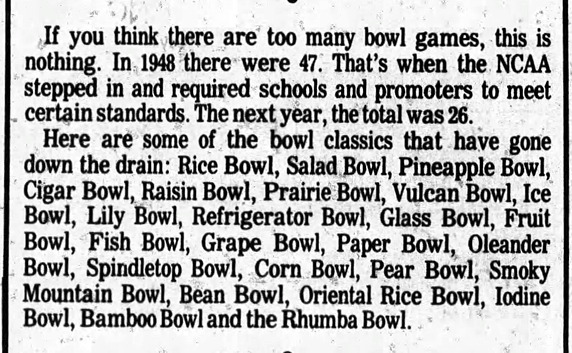 
Comments
I was quite far down the list before I realized it couldn't be horribly perverted things some people put on pizza.
Posted by Phideaux on 01/02/19 at 09:52 AM
How reassuring, to know the Fish, Salad, and Fruit Bowls have all been done.
Posted by Virtual on 01/02/19 at 11:01 AM
Commenting is not available in this channel entry.