People are either right-handed or left-handed. But are people also left-nostriled and right-nostriled? Yes, they are — as reported in an article published in the journal Laterality (Mar 2005). From the study:

Result: The present data support these predictions: for both left-handers and right-handers the nostril that had the significantly greater airflow was ipsilateral to the preferred hand almost 60% of the time.
The researchers also discovered that people are pretty much useless at self-determining their own nostril dominance. (i.e. It's very hard to tell which nostril you're breathing more air through.) So they used a gadget that measured airflow into each nostril to get an accurate measure of nostril dominance. 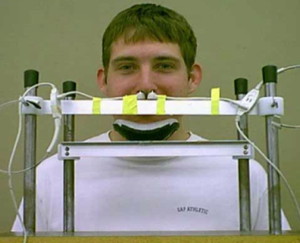 
Comments
That looks...uncomfortable, to say the least. But then, the only time I had to wear nasal cannula they drove me absolutely batty.
Posted by Anonypenguin on 08/04/12 at 10:08 AM
If they'd not've use the word "ipsilateral" I'd've not believed this was a genuine scientiffal study.

So, now, people who are not ipsilateral will be eligible for relief under the Americans with Disabilities Act?
Posted by Expat47 in Athens, Greece on 08/04/12 at 12:32 PM

This is nothing new... the yoga pranayama (breathing) practice of anuloma viloma consists of inhaling through the left nostril while holding the right shut, holding the breath with both nostrils shut, then exhaling through the right nostril while holding the left shut. The goal is to work up to a count of 4 : 16 : 8 for the different phases. Just as yoga strives to equalize strength in both sides of the body's muscles, it strives to equalize the volume and efficiency of breath through each of the nostrils.
Posted by ScoutC on 08/04/12 at 10:16 PM
Now if Lord Baden-Powell had only known about this (see prior thread on Boy Scouts' Left-Hand Handshake). Perhaps there would have been a merit badge for blowing your nostrils equally! :roll:

And let's not get testy now, Patty, there's a pill for that. 😊
Posted by done on 08/04/12 at 10:20 PM
Has that "moon thing" come around again, girls?
Posted by Expat47 in Athens, Greece on 08/05/12 at 12:07 AM
Of course it's a function of handedness. Numerous studies have demonstrated the neurological basis for how people pick their nose.

Subjects who extract nasal secretions with their pinkie finger overwhelmingly do so with the nostril on the opposite side of their nose. Those who use their thumb extract from the nostril on the same side of the body. Interestingly same-side extractors show an IQ an average of 27 points higher than opposite-side extractors. Theoretically, this could lead to a higher overall survival rate in same side extractors, resulting in a "cleansing" of the gene pool of opposite siders, thus explaining the predominance of same-side pickers.
Posted by John on 08/08/12 at 12:04 AM
Commenting is not available in this channel entry.