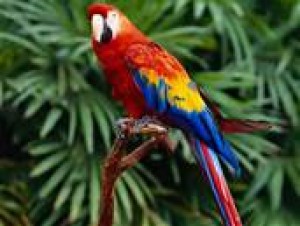 
Comments
Everyone read this and help give Patty the bird.
Posted by BrokeDad in Midwest US on 04/20/15 at 08:56 PM
A bit surprised, but not shocked.
I was shocked when I first learned that parrots can understand the words they learn, but that was some years ago. Alex the African Grey http://en.wikipedia.org/wiki/Alex_(parrot) knew about 100 words including the names of several shapes and colors and materials, and the first show I saw about him showed footage of him answering a question he'd never been asked before, "What matter yellow?". After picking up the yellow thing and biting it, he replied "wood".
Posted by SpyOne on 04/20/15 at 10:42 PM

I'm no ornithologist, but it seems to me that, from the dumbest pigeons and chickens, to the smartest parrots, macaws, and crows, birds make better use of their brains, gram for gram, than we mammals.

@Josh: Modern day birds are descended from dinosaurs and dinosaurs were AWESOME!
Posted by Expat47 in Athens, Greece on 04/21/15 at 01:32 AM
Parrots don't just parrot what they say. They may not be able to diagram a sentence, but they certainly have a good idea of what the sounds they make mean. Our first parrot learned the phrase "good boy". After a while, he would occasionally say "good, good boy", even though we were fairly sure we'd never said it. As time went by, he added more goods, and, by the time he got to "good, good, good, good, *good* boy", he and we knew that whatever he was doing was not good at all.
Posted by TheCannyScot in Atlanta, GA on 04/21/15 at 07:47 AM
Until five years ago I had no experience with the larger psittacines (to use their family name). I was given an Amazon parrot of indeterminate age, although after asking around I calculated her age to be around 45 years old. She was not affectionate but was tame and did accept me as part of her flock. She didn't know too many words, other than "Hello" in three different modes and a chuckle learned from a woman, but I believe that some thinking process was going on in her little head.

I did succumb to the "replacement" urge and found a little African Ring-neck Parrot (a parakeet, actually). She doesn't talk either but does like being stroked for long period of time.
Posted by KDP on 04/21/15 at 05:51 PM
Commenting is not available in this channel entry.