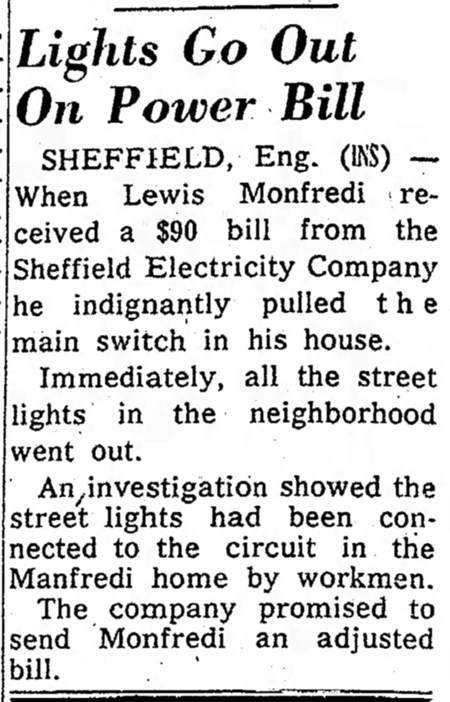 
Comments
Can you imagine what that would cost for a month now?! It had to be done either maliciously or as a prank. That could not be a simple mistake, the electric guys are not that simple!
Posted by Patty in Ohio, USA on 09/13/15 at 11:06 AM
They must have wired it in series rather than parallel. What I don't understand is why his power didn't go out every time they turned off the street lights. And didn't anyone notice the street lights were dimmer?
Posted by Phideaux on 09/13/15 at 11:56 AM
Was that before light sensors that turn out the lights individually at daylight? Because with those the power still goes to the light so it is not turned off.
Posted by Patty in Ohio, USA on 09/13/15 at 12:03 PM
@Patty -- Technically, they could have been, but I doubt that became a thing prior to the late 1960s when the price of photocells dropped considerably. Most of those in the 1950s were on timers. Maybe they were left on all the time? I know some were because it increases the lifespan of bulbs considerably.
Posted by Phideaux on 09/13/15 at 11:11 PM
Electricity is not a real thing! It's magic and when mundanes are allowed to attempt to practice it anything could happen. It's a wonder nobody got frogged in the process!
Posted by Expat47 in Athens, Greece on 09/14/15 at 12:41 AM
@Expat47 -- I've seen the magic blue smoke come out of a resistor! The circuit does nothing once the magic escapes.
Posted by Phideaux on 09/14/15 at 01:52 AM
It's tragic when a little electroelf dies a horrible death like that. So sad.
Posted by Expat47 in Athens, Greece on 09/14/15 at 02:49 AM
I had something similar years ago with an apartment a friend and I rented in Eastern Nebraska. When my roommate and I received our first electrical bill of the summer in was HUGE. Come to find out that when they had done some recent remodeling of air conditioners (prior to our moving in) they hooked all four units of our building into our main. Not the rest of their apartment's electrical needs, just the a/c. No way were we going to pay for their cooling needs over a hot Nebraska summer. It took a while to remedy.
Posted by daSDShirt on 09/14/15 at 07:16 AM
Commenting is not available in this channel entry.