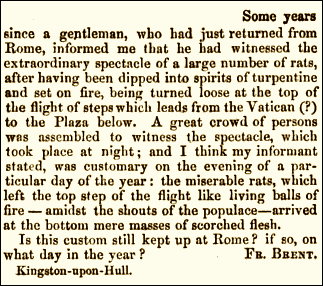 
Comments
IIRC, there is no long flight of steps up to the Vatican. And I don't know about then but now there are sufficient cats on the prowl (no pun) in most Mediterranean cities to, at least, impede the rat population.
Posted by Expat47 in Athens, Greece on 03/05/14 at 10:03 AM
The long flight of steps sounds like the Spanish steps, it's across the Tiber from the Vatican, and it's something that a tourist would be familiar with. Burning the rats sounds like something you'd do to avoid the plague, and perhaps this odd festival has some historical link to that...?
Posted by steffan on 03/05/14 at 11:54 AM
I'd bet that somewhere a garage band is thinking of a name for themselves. From what I can tell, "Burning Rats" hasn't made a splash, yet.

The US Army Air Corps planned something similar with canisters of Mexican Free-tailed Bats carrying timed incendiary devices to drop on Tokyo in 1944-45, but the project got cancelled. Wiki: "Bat bomb".
Posted by tadchem on 03/05/14 at 03:04 PM
Harald Hardrada is supposed to have captured a town in Sicily by attatching burning tinder to birds. When the birds flew back to their nests in town, they started many houses on fire. I would think that burning rats and large piles of garbage would be a problem.
Posted by BMN on 03/05/14 at 05:20 PM
That is horrible, I hope its not true. I have no love for rats (ick!) but no living creature should be deliberately tortured in such a way.
Posted by Patty in Ohio, USA on 03/05/14 at 07:49 PM
@Patty: Why, you just aren't the fun girl you want us all to believe you are, are you? 😜
Posted by Expat47 in Athens, Greece on 03/06/14 at 12:44 AM
Expat is correct, and steffan might be, as well. In fact, there's one specific old ruin in Rome - I've forgotten which, a forum of some kind, but not near the central Forum Romanum - which is now (due to settling and re-building) several feet below the level of the surrounding modern streets; it's been fenced off to preserve it and to prevent drunk tourists from falling in, and it's now famous for being downright infested with feral cat-vermin. I'm sure there are still rats around, but you'd have to save them up for a whole year to get enough for such a spectacle. And I doubt the RC church would stand for it happening now - certainly not under a pope named Franciscus!

There are only two other notable stairs I can remember in Rome - one leads up to the Palatine (ok, there's another one right next to it), that could be the one intended. The other is the one leading up to the Wedding Cake - sorry, Vittorio Emanuele monument - but that didn't even exist when this article was written
Posted by Richard Bos on 03/06/14 at 07:53 AM

the same festival in Indonesia
Posted by freakss.co.vu on 03/21/14 at 05:37 AM
Commenting is not available in this channel entry.