San Francisco has a serious public urination problem. That is, too many people using doorways and the sides of buildings as urinals. One solution now being tried is the PPlanter. The basic idea is that it's a urinal that channels all the waste liquid directly into an adjacent planter full of bamboo, and the bamboo filters and purifies it.


An ADA-compliant sink is supplied with a human powered foot or hand pump connected to a freshwater supply tank. The greywater from the sink, along with soap residue, flushes and cleans the urinal, keeping odor to a minimum.
The greywater, soap and urine (blackwater) from the ADA-compliant urinal are funneled to a sealed storage tank. The combined water is then pumped into an adjacent planter that houses bamboo plants set in a lightweight mixture of soil and recycled styrofoam coated in pectin. The water from the urinal and sink is evapotranspired by the bamboo and released into the air as distilled, purified water. The bamboo harnesses the incredible amount of nitrogen and phosphorus found in the urine and uses it to produce more bamboo. With high traffic urinals additional planters can be added to the system. 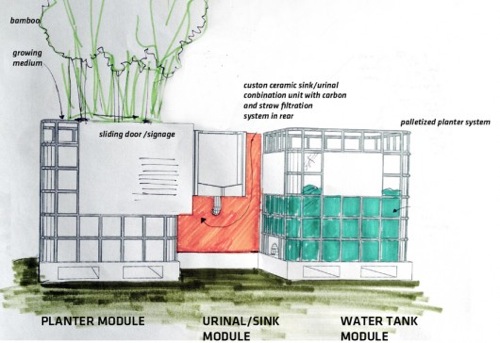 The lack of privacy is intentional. But if you have to do a #2, I think you're still out of luck.


Comments
Who's paying for this one and where's the money coming from?
Posted by Expat47 in Athens, Greece on 03/06/14 at 10:24 AM
"San Francisco has a serious public urination problem."

Actually the problem is the looney bin that San Francisco has become. No one wants to admit that it has become the last stop for the cultural misfits and social castoffs from everywhere else. The city is placed in a bind because if it cracks down on the problem, the loonies rise up and scream "OPPRESSION!", and if the business owners try to do something, the city forbids them from taking any action.

Will this scheme work? Probably not to the degree that is necessary to alleviate the problem of public urination. The city tried the pay toilet concept in the late '80's but it didn't go far because of vandalism.


Fire hydrants and litter boxes would be more cost effective - and culturally appropriate.
Posted by tadchem on 03/06/14 at 01:51 PM
How about regular public toilets. Most businesses chase the homeless out if they come in to use the bathroom because they usually are not buying anything. Where are they supposed to go?
Posted by Patty in Ohio, USA on 03/06/14 at 07:22 PM
Why not install urinals like the ones at the end of this article?

dumbledoor, that looks to be the more modern version of the pissoir, a fixture on French streets for years that sadly no longer exists. But that still leaves out the girls and where they can go when the need arises.
Posted by KDP on 03/07/14 at 09:49 AM
KDP, loss of the pissoir wasn't so bad when it was a hot day. P.U.
Posted by TheCannyScot in Atlanta, GA on 03/07/14 at 12:33 PM
The Danes seem to have been thinking about this for a while. There's a website devoted to public urinals at http://peebetter.dk , including the Pollee, a four-station pissoir for women.
Posted by TheCannyScot in Atlanta, GA on 03/07/14 at 12:48 PM
I don't think this is really going to solve the problem as the people who will publicly urinate aren't going to find an approved location!

A more urgent problem facing California is the water shortage. Imagine if all new homes implemented a <a > greywater irrigation system </a> into their landscapes. I think we could start solving real problems facing California's urban (and rural) population.
Posted by JB on 03/20/14 at 07:26 PM
Removing the 8M?? illegals would be a good start.
Posted by Expat47 in Athens, Greece on 03/21/14 at 01:23 AM
Commenting is not available in this channel entry.