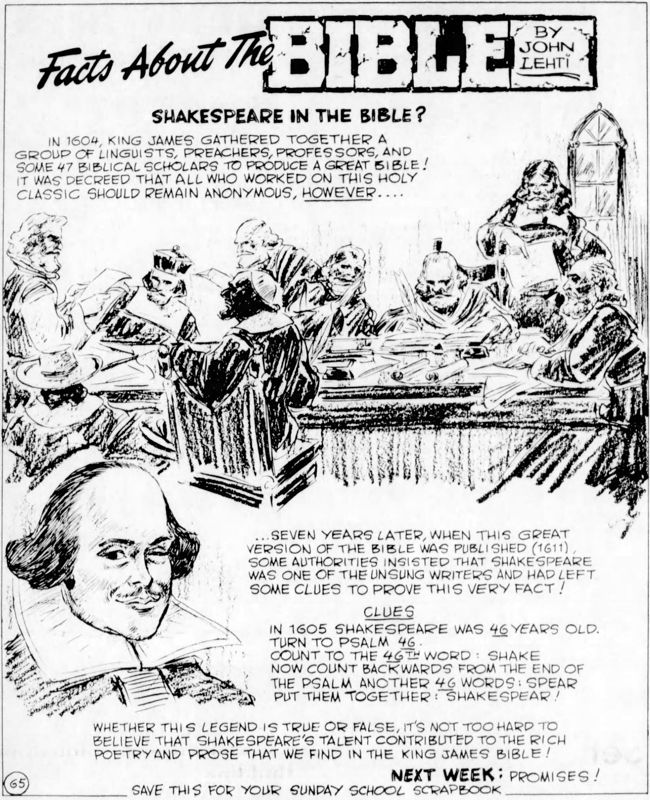 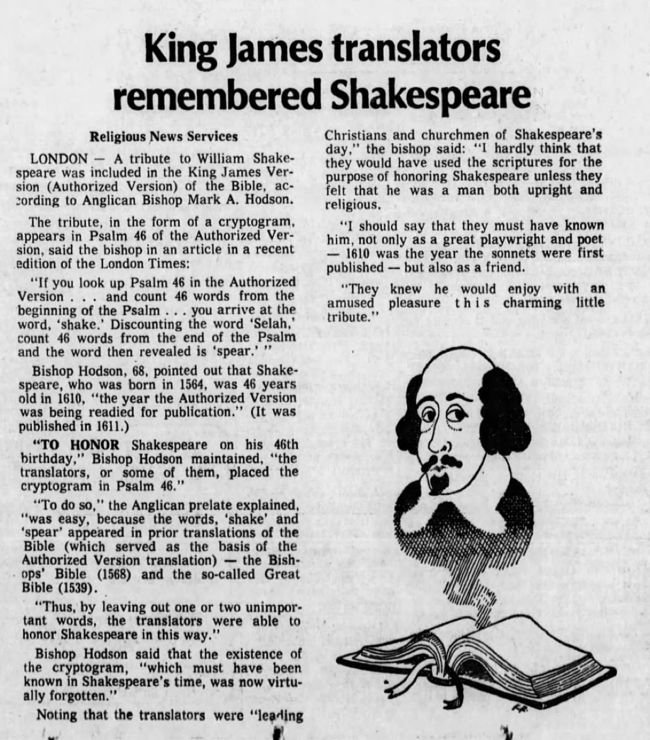 
Comments
"perhaps it means absolutely nothing"

This is the same kind of b.s. thinking used to show that Ronald Wilson Reagan was really the AntiChrist of Revelations from the christian Bible. The reasoning stems from the fact that each part of Reagan's given name has six letters each. And of course, three sixes in a row is the Mark Of The Beast!

Oh, ye of little faith....
Posted by Expat47 in Athens, Greece on 08/31/16 at 11:08 AM
I don't hold with the numerology part (four vowels, six consonants), but the hiding his name in the text is just the sort of thing I'd expect from someone like Shakespeare. I wonder if anyone has ever done a search for other names hidden in the same way -- with decent computer skills, it shouldn't be too difficult. (I admit I'm not a Bible scholar, so I don't know if the word 'bacon' is anywhere in scripture, but that's the first thing I'd look for.)
Posted by Phideaux on 08/31/16 at 11:33 AM
The bible can be very confusing. It's composed of a number of different documents sort of tossed together into two acts. The Old and New Testaments. Now in the old days prior to word-processing, good grammar and spellcheck each document was hand copied by scribes who were often illiterate. They could copy but did not understand what they were copying so a mistake here and poor copy there led to changing the meaning of the documents. When things finally were consolidated from all the fragments and translated multiple times, often the original story was lost. Then the group paying for the bibles, well they had to express their views since they paid for it. Since King James was footing the bill perhaps he insisted it say what he wanted and perhaps he enjoyed Shakespeare's wit and humor and let him in on the revision team. So the Bard had to get his name in one way or another.
Posted by Gator Guy on 08/31/16 at 07:54 PM
Yeah, 'cause there wasn't any Bible in ancient Hebrew that had to be translated relatively accurately, they could just put any words they liked in there...
If this is intentional, which I doubt, whoever did it got bloody lucky that the words were there in that very Psalm to be fudged into place. If Shakespeare had been called Shakesword, no dice: no swords are mentioned in either the 37th or the 73rd Psalm. (And yes, the spear, or "spears" depending on translation, is present in other languages as well.)
Posted by Richard Bos on 09/03/16 at 03:06 PM
Commenting is not available in this channel entry.