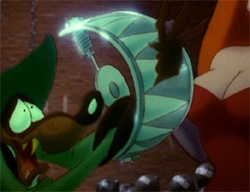 
Comments
Sorry if you got excited by the title, fellas. The image is from a scene in the movie Who Framed Roger Rabbit? in which one of the hyenas reaches into Jessica's cleavage and gets his paw stuck in the trap. Nice booby trap 😉

i was raised to have the upmost respect for police. that said if i had been ambivelent to start then watching those brave police and firemen running INTO the wtc buildings when all others were running out would have brought me to my current position. get an unfair ticket? ask yourself how many drunks are stopped from killing people by police stops. think the police hassle you? ask yourself how many cops are shot walking up to a car to tell some drugie to slow down or that their tail light is out. and when you hear someone in your home in the middle of the night with your children sleeping in their beds remember who you call to protect and serve.
end rant
sorry but i read some of the comments after the article over there and they pissed me off. a job like that will draw some assholes but mostly they are just people who want to help and make everyone safe. i hope the assholes booby-trapping those cops blow themselves up while doing it. that would fix the problem rather efficently.
Posted by Patty in Ohio, USA on 03/19/10 at 10:20 AM

I read some of those comments too, patty, and had to stop. They were cheering the thugs on. I've never once had any trouble with the police, cause I'm boring, so I don't understand the mindset behind these attacks.
Posted by Nethie on 03/19/10 at 02:20 PM
normal law abiding citzens never do. just the rest of the worthless thugs.
Posted by Patty in Ohio, USA on 03/19/10 at 02:35 PM
obviously it's because wayne in not you middle name that you were able to mend your ways sweetie. 😉
Posted by Patty in Ohio, USA on 03/19/10 at 09:09 PM
Perhaps the $200,000 reward will get them somewhere, since this has been going on for a few months now.