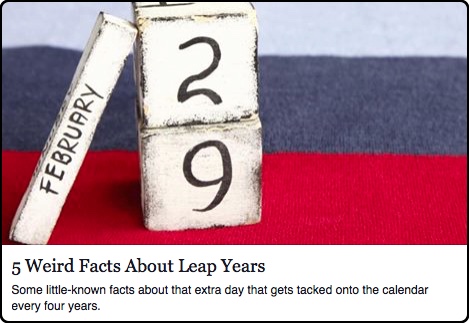 Reminds me of the rhyme I remember which months have 31 days by:

Thirty days has September, April, June and November. All the rest have 31 excepting February done with 28 days clear and 29 in each leap year.
Or do the knuckle thing, that works too.
Posted by Patty in Ohio, USA on 02/24/16 at 02:14 PM
Actually, the Romans screwed it around even more than that.
Both Julius and Augustus Caesar had a day taken from February and added to their birth months ('cause screw February, it's cold!), and their months were moved from the Winter to Summer ('cause screw Winter, it's cold!).
That's why September, October, November, and December are the 9th, 10th, 11th, and 12th months, even though their names mean 7th, 8th, 9th, and 10th month.

Which means that back in the day, if your Birthday fell on February 29th, you lost 3/4ths of your birthdays, and , worse yet, if your birthday was February 30th, you never had another Birthday... bummer!

And speaking of that whole AD-BC thing; if the Christian calendar is supposed to have started on Christ's birth, why is the New year January 1st instead of December 25th?

Seems the whole Roman civilization, Pagan and Christian, was a bit "meh, whatever" about keeping the calendar accurate.
Posted by Captain Daft on 02/24/16 at 09:37 PM
And because the earth's rotation is slowing, we get a leap second every 18 months on average.
Posted by BMN on 02/24/16 at 10:52 PM
Actually, the New Year was celebrated on March 25 in England from 1155 to 1752. That's the Feast of the Annunciation, also known as Lady Day (not to be confused with Billie Holiday).
Posted by ges on 02/24/16 at 10:57 PM
Monday = Moon
Tuesday = Tyr (Norse God)
Wednesday = Woden (That's Odin for you Vikings watchers)
Thursday = Thor
Friday = Frigg (Norse God)
Saturday = Saturn
Sunday = Sun
Not one Christian amongst them!

In Greek Sunday is "Κυριακή" (the first) even though the Bible admonishes them to "keep the Sabbath holy".
Posted by Expat47 in Athens, Greece on 02/25/16 at 12:04 AM
Actually, the whole thing about days being taken from February is a myth. January and February were a later addition to the Roman calendar, though still long before Caesar; they started with a ten-month year which turned out to be good unworkable for an expanding city-state. But curiously enough, even at that stage February was shorter than the other months, though early Roman calendar-keeping was such a politically-involved mess that nobody seems to be sure how many days exactly (and do not ask about consistency in leap-year keeping...).

What is true, though, is that the two months after May used to be called Quintilis and Sextilis (5th and 6th, names dating from before the addition of January and February, which also explains why the 9th through 12th months are named after 7-10 in Latin), and were renamed, at different points, Julius and Augustus to honour the zeroth and first emperor.

But it's all fro naught anyhow 'cause the 1st thing they do when entering a church is to bow down to a graven image. 😉