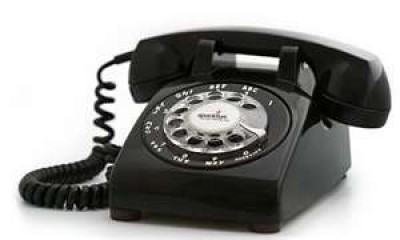 In a stupid to the nth degree move the state of Ohio Senate is considering a bill to allow phone companies to get rid of land line service. Now, aside from the fact that there are still places in the civilized world where cell reception is thready and/or non-existent, what about having a choice? Every time choices are narrowed for the consumer cost goes up for them (us) as well. Corded land lines will work when the power is out and they do not have to be recharged. Emergency services can track an address through a 911 call from a land line too. Really, what's the rush, other than making points with the industry for election time of course.


Comments
Yes, I live in Ohio. God I hate politicians!!! 😠
Posted by Patty in Ohio, USA on 03/28/12 at 10:07 PM
Ya know, I'm gettin' sick and tired of the ignorant, uninformed, unwashed masses trying to tell our politicization, those paragons of intelligence and common sense, how to run their respective geo-political areas of this great nation! Just vote when, where, and how you're told then shut up!
Posted by Expat47 in Athens, Greece on 03/29/12 at 12:39 AM
Yes Sir! oh I mean Aye Aye Sir! (Since you were Navy) :cheese:
Posted by Patty in Ohio, USA on 03/29/12 at 01:12 AM
In the Heinlein book "Starship Troopers" a voter must have taken a Citizenship course in school and then EARNED the right to vote.
Posted by Guest on 03/29/12 at 01:52 AM
Back in the day, every kid in public school in my home town took such a course in 9th grade. It was called Civics Class. I've no idea what they aren't teaching there today but, by the look of things, it may not be enough!
Posted by Expat47 in Athens, Greece on 03/29/12 at 02:04 AM
@Guest, YES, citizenship and citizenship classes would be a good thing would'nt they? Good book BTW. Movie? Not so much. But now, there are people in this United States who have made it where you don't even have to be a citizen to vote, much less be here legally. When some governments said they are going to require voters to show an identification in order to vote, some advocates for certain groups said NO, no se puede. Makes perfect sense to me. NOT.
Posted by ILoveThis Country on 03/29/12 at 08:35 AM
Yes, and there were giant bugs in that movie too.
Posted by Patty in Ohio, USA on 03/29/12 at 09:12 AM
This is happening in KY too.
Posted by Rodger on 03/29/12 at 09:25 AM
So, the consensus is that a government controlling what a private company invests in is good?
Posted by Fluffy Bunny Slippers on 03/29/12 at 02:55 PM
When a company uses the public right of way and taxpayers' money to maintain its functions, it can't really be called "private" anymore. In Ohio, the phone companies bargain with state and local governments for what constitutes a monopoly using public land and local taxes.

The bill is asking to reduce the services rendered in exchange to the public. Cable and electric companies have lobbied for similar measures and Ohio has been happy to screw the public for corporate gain.

If competition existed between these not-so-private companies, the government wouldn't be involved in the first place (or at least not for the same reasons).
Posted by Mark on 03/29/12 at 03:26 PM


Oh, ok, Thanks for clarifying, Mark (insert smiley here)
Posted by Fluffy Bunny Slippers on 03/29/12 at 04:31 PM
Commenting is not available in this channel entry.