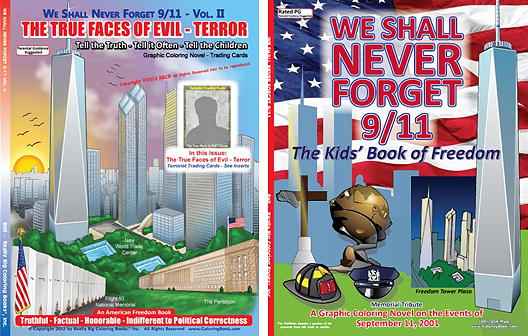 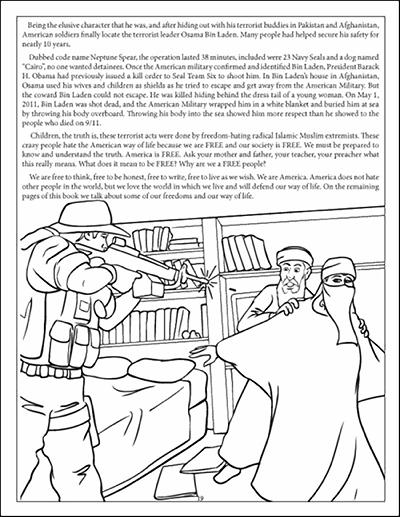 
Comments
"Indifferent to political correctness" explains why the public schools aren't buying it.
Posted by tadchem on 09/03/14 at 02:34 PM
You just have to love freedom of the press here in the States. As long as it is not libelous, I have no problem with what the publisher has to say.

Spreading weirdness to adults who are supposed to have all their critical thinking skills is one thing, but indoctrinating kids is entirely another.
Posted by Sebastian on 09/03/14 at 06:56 PM
Assuming it's factually accurate (the whole "we shot Osama while he literally hid behind a lady" thing sounded exaggerated, but I wasnt there), I'll give it a thumbs up. If kids aren't taught fact from opinion (plus how to navigate the grey areas in between), and to take anything you hear with a grain of salt, they WILL be indoctrinated one way or the other. Coloring books or no. Reasoned opinions are part of knowledge, and there's no way to impart knowledge without it.

Being state employees, my school staff leaned pretty hard to the left, and I think it's getting out of hand: "Recently we even got a letter from the White House telling us that they were not very happy that we're teaching children the word terror,". Not only is trying to teach english and history while you redact words and events deranged, but it's dangerously close to implementing Newspeak, ala 1984. It's double-plus-ungood, I say./rant
Posted by BHicks on 09/03/14 at 08:17 PM

So what happens when my little pumpkin gets caught colouring in an AK47 in kindergaden?
Posted by BMN on 09/03/14 at 08:43 PM
If somebody doesn't get his sh1t together and start acting the 'little pumpkins' are going to have to start learning to load AK's in Kindergarten!

Heh, On the picture in the article of America's enemies, it labels Israel as america's best friend... Poor Canada and Britain, you think being america's biggest trades partner or sending troops to fight with america in it's wars would be a bit higher on the friend scale... Perhaps it's cause the author feels it is more of a familial relation perhaps?

Yeah, i think my main problem with this is if i'm gonna draw in a coloring book, i wanna draw dinosaurs, or aliens, or barbie in her automobile and not some poor tortured christian dude or a picture of someone about to be shot. It'd make me wanna wash the red crayon off my hands afterwards cause i'd feel complicit in some sort of taking real life death and torture and making it a children's playtime. Teach the kids, by all means, just don't have them draw in the blood with crayons.
Posted by Fluffy Bunny Slippers on 09/04/14 at 06:54 AM
Shoot them ALL! Let allah sort them out! :coolmad:
Then we won't have this sort of problem. :coolsmile:
Posted by Tyrusguy on 09/05/14 at 01:21 AM
Are there really any schools that USE coloring books? I never had or used a coloring book in school at any level. My mother, who has spent decades teaching K-3rd, has never heard of a school using a coloring book either. The real issue the publisher may have is not the content of the writing, but rather the medium (coloring book)
Posted by SomeGuy on 09/08/14 at 02:57 PM
Commenting is not available in this channel entry.