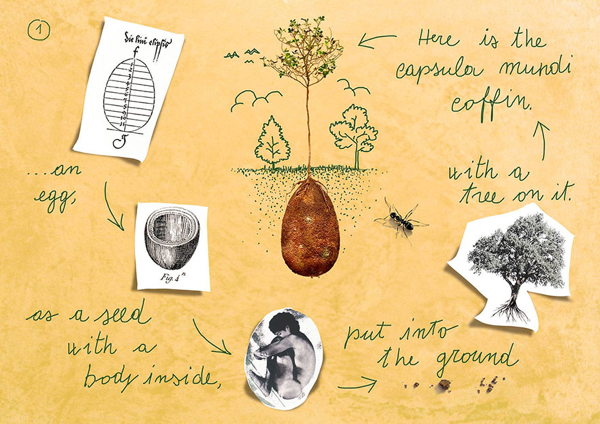 
Comments
Without even looking I can tell you that it's illegal here in Greece too because The Church isn't getting it's cut so they'll not approve. No, Greece isn't a theocracy.

We cremated Pop, put him in a $300, specially crafted urn that dissolved in water, and chucked him into the Mississippi River. When I heard Mom has spent $300 for a jug made from sun-dried mud I went and had a long talk with the funeral home dude and offered to sell him all he wanted for $2.00 a piece shipping included from Greece. Oh, yea, then we planed a tree in the park (after a long fight with the city) and put a bench up by it.
Posted by Expat47 in Athens, Greece on 03/11/15 at 10:30 AM

Actually I think this (or something similar) may be legal in a few limited locations. It is called a "Natural" or "Green" burial. The deceased person is NOT embalmed, and they are buried without a casket in a specially designated cemetery which only does these types of burials. I would have to do some more research, but I think there is one such cemetery up in the New England states somewhere. It has to be done carefully because of the public health considerations of decomposing bodies. If any other NOTW readers know the details on this, please share.
Posted by OldMemory96 on 03/11/15 at 11:48 AM
These are the opposite of environmentally friendly!

People can visit cemeteries. They can't visit these sites -- once the body rots and the container is compromised, there's a void, making the tree unstable. After about 10 years, a good breeze will knock over a lot of them.

Human bodies contain a lot of metals and pathogens which you really don't want leeching into the water supply.
Posted by Phideaux on 03/11/15 at 02:04 PM

I grew up in a rural community, and I know of at least one person who got a burial like OldMemory96 described. No embaling, no coffin. Just wrapped in a shroud and buried in the woods near the house he lived in for so many years. It wouldn't shock me if the burial was not entirely official or legal, but I think I remember hearing that they did have official permission.

With the way that embalmed bodies poison the land, it seems odd that it is so hard to opt out of this practice. Personally, I want my body to be used for transplants or teaching purposes, but if they can't use my body for some reason I certainly don't want to pollute and waste resources with embalming or incineration. When I'm done with my body, I want it to represent a valuable resource not a toxic waste product.
Posted by Miles on 03/11/15 at 02:11 PM
Human bodies do not contain significant amounts of metals, and certainly not toxic levels of anything, except when they have been embalmed. Bodies do represent a bacterial load, but bacteria do not leech through soil and contaminate water supplies to anything resembling the degree that toxic compounds like formaldehyde or the heavy metals and contaminants found in embalming fluid do.
Posted by Miles on 03/11/15 at 02:23 PM
Sounds like Orson Scott Card's "Xenocide", an entry in the Ender Wiggin series, where the natives on a planet had a tree planted on the corpse of the departed.

During a trip to France in 1987, Mrs. Peterson, my college instructor, placed me with the English teacher from the school where she had been a Rhodes Exchange teacher. Mme Bell lived outside of town on a small farm which her family had owned for centuries, I kid you not. In the back yard there were a few headstones scattered about. I asked about them and she told that since their family were Protestant, they weren't welcomed in the Catholic cemeteries. I asked how many were buried and she replied, "Many. In fact, you're probably standing on great-grandma, right there."
Posted by KDP on 03/11/15 at 04:17 PM
"Green' burials are legal in many places. IIRC one city council was trying to make vertical burials legal so a plot would only be 2'x2' or maybe 3'x3'.
Posted by BMN on 03/11/15 at 05:22 PM
@miles -- Significant amounts result from a multitude of insignificant amounts being concentrated in an area.

I recently ran across an analysis that a typical English broadsword could be made from the iron in the blood of less than 400 people. Not the iron in muscles, just the blood.

The "insignificant" amount of mercury, cadmium, lead, and thallium in an average person's body becomes serious when you begin burying hundreds per acre.

Research in 2003(?) showed presence of prions in well water and attributed the probable source as the nearby cemetery of a sanitarium.

Embalming fluid does not contaminate water supplies because, in current practice in most parts of the world, embalming is done only when/where the bodies will be enclosed in vaults. Even when there is a vault failure, the embalming fluid is sequestered by fixation unless there is such a catastrophe that running water disturbs the remains.
Posted by Phideaux on 03/11/15 at 07:32 PM
Jewish burials have been "green" for thousands of years. No embalming, only a shroud and a plain wooden box (or not -- in Israel they typically forgo the coffin).
Posted by ges on 03/11/15 at 08:50 PM
Foxfield Preserve is a natural burial cemetery up in Cleveland which currently offers said service. I'm not advertising for them, but I have looked into what they offer. As a couple people have mentioned, there is no embalming, no casket. The body is wrapped in a shroud and buried. There are limitations on the type of marker and, last I read, there was no provision for trees to be planted on top.