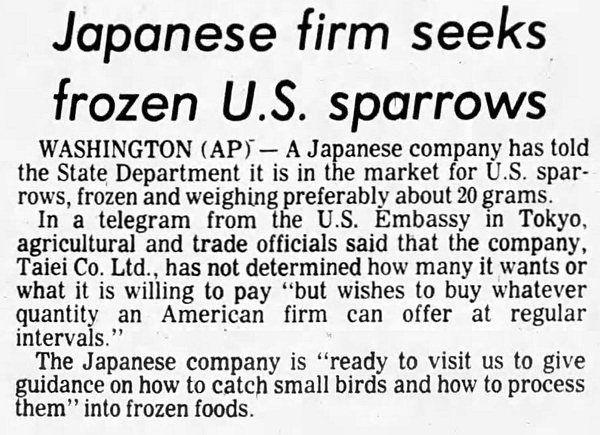 
Comments
I sounds like the Japanese were buying sparrows for meals in a high end restaurant. In the time of the earlier centuries, sparrows would not have been eaten as a delicacy, but as a necessity. They were numerous and easily caught. Also, you weren't in danger of being apprehended and prosecuted by the King's Men, unlike if you were to hunt something with more meat on its bones.

I wonder if anyone thought they could make a little money on the side in such an operation by cutting out the tongues and selling them to the Brits on the black market as lark's tongues.

iirc (which isn't actually very likely) sparrows are the largest bird you can, in a survival situation, gut, behead, wrap in clay, bake under your campfire, and eat without taking out the bones (the feathers/skin come off when you break it out of the clay).
Posted by Phideaux on 06/28/21 at 02:43 PM