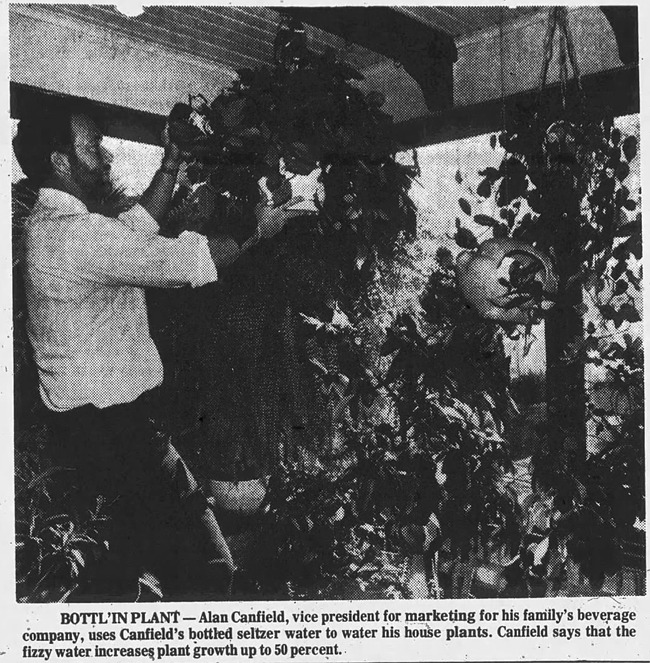 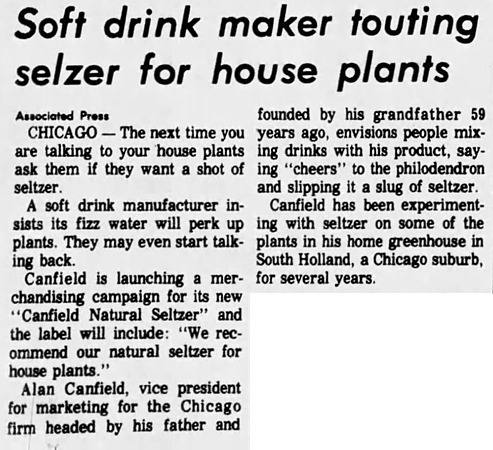 I doubt the effect would be significant, but it probably would be measurable.
Posted by Phideaux on 07/19/18 at 10:36 AM

I agree, Phideaux. Also, doesn't seltzer contain some minerals? Or am I thinking of what I could get off the shelf in France called "eau mineral gazeuse"?
Posted by KDP on 07/19/18 at 07:03 PM
KDP, seltzer is plain carbonated water. Presumably the source is the municipal water supply, which may or may not have trace minerals. Club soda generally has added minerals, potassium bicarbonate and/or potassium sulfate according to Wikipedia.
Posted by ges on 07/19/18 at 10:30 PM
@KDP -- A quick Google didn't reveal any details about this brand, but the nomenclature for these things is often hedged and deliberately made murky. At a guess, I'd say it doesn't have enough minerals to justify, even to the ad department, calling it mineral water. Source might be a mountain spring, a city reservoir, or a pipe direct from a municipal treatment plant, all of which will contain some minerals, but not consistently high amounts.

Perrier is the only sparkling (naturally carbonated) mineral water I know about, and I'm not about to buy that stuff for houseplants.
Posted by Phideaux on 07/19/18 at 11:35 PM

San Pellegrino is also a mineral carbonated water. Typically, when you dine at an upscale restaurant and the waiter bills you an insane amount for water, it's because it's San Pellegrino. Also, "I only water my plants with San Pellegrino" sounds very posh.
Posted by Yudith on 07/20/18 at 12:09 AM
Thanks everyone.

Phidaeux, during my first trip to France with a college group in 1987, I observed that Perrier was priced at about one third of what was charged in the States. In fact, on my visit last year I saw that it is still priced at about the same ratio at the grocers.
Posted by KDP on 07/20/18 at 10:11 AM
@KDP -- It stands to reason it tastes better and is better for you here than it is in France -- here it's imported and there it's just domestic.
Posted by Phideaux on 07/20/18 at 06:40 PM
Of course, Phideaux. Appearances are everything. 😜
Posted by KDP on 07/20/18 at 10:05 PM
@Yudith -- If you want to know what it really means to be posh, you have to check out the "Posh Nosh" episodes on YouTube. A very worthwhile peek into the life of the upper upper-class.
Posted by Phideaux on 07/20/18 at 10:24 PM
Yudith: not usually in Europe. San Pellegrino is the ordinary semi-posh Italian carbonated water, not more nor less exclusive or expensive than other big-brand waters such as Perrier. (It's also absolutely foul, but that's just my opinion.)

If you want stupidly expensive water over here, you buy Naive, sorry, Evian.

(As for Posh Nosh... yeah, not really. That's what it's like to be upwardly mobile middle class gunning way above your station and not pulling it off nearly well enough. It's also, obviously once you see it, a parody. Now, if you want real posh nosh, try the Two Fat Ladies - now, alas, both deceased.)
Posted by Richard Bos on 07/21/18 at 05:30 AM
Posh Nosh is a parody? Really? Are you sure? I mean, are you really, really sure?

I would never have intentionally tried to lead someone into believing it's a serious work worthy of consideration if it's actually a subversive comedy performed with outrageous panache.

I guess it would explain, however, why I've never been able to buy the organic salt they recommend (I just assumed I was shopping in the wrong stores).

Posted by Phideaux on 07/21/18 at 02:12 PM
The parody is obvious if you're slightly acquanted with English society - I'm not sure how obvious it is if all you've ever been around is Bostonians. The main point is, though - and this is evidently not obvious to all Colonials - that it's not a parody of the upper class, it's a parody of people who think they pass for upper class but very, very clearly do not.

As for the organic salt, you'd be suprised. I know people who believe in that. Yes, of course they're fooling themselves.
Posted by Richard Bos on 07/22/18 at 04:14 AM
Commenting is not available in this channel entry.