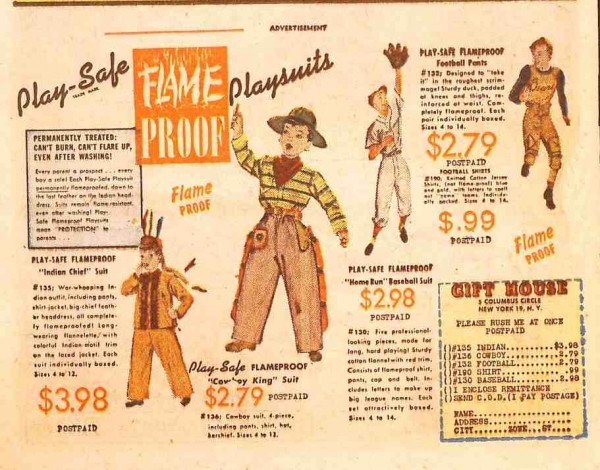 
Comments
Wonder if they were made of asbestos?
Posted by RobK on 06/27/14 at 11:26 AM
The activities for the costumes are not usually associated with fire. Perhaps this is early advertising for Hallowe'en?
Posted by KDP on 06/27/14 at 11:45 AM
The kids' costumes were usually only used on Halloween because they were very flimsy, and often would not last the night. Especially around smokers or candle-lit Jack-O-Lanterns...
This was before LEDs and glowsticks.
Nowadays the costumes are treated with fire-retardant chemicals - most of which are carcinogenic.
Posted by tadchem on 06/27/14 at 01:54 PM

All kids' pajamas are required to pass flammability standards: http://www.cpsc.gov/PageFiles/103092/regsumsleepwear.pdf
Posted by ges on 06/27/14 at 02:17 PM
How dare any kid dress as an Indian Chief and insult our native Americans that way ?
Posted by BrokeDad in Midwest US on 06/27/14 at 05:26 PM
I wonder if the company later offered a "Human Torch" costume?
Posted by KDP on 06/27/14 at 05:44 PM
My dad used to talk about how when they wanted to go ice skating at the pond, grandma would take an empty tuna can, fill it about half full of gasoline, and light it so they would have something to warm their hands with.

So, yeah, I'd say kids used to spontaneously burst into flames a little more frequently than they do today.

P.S. Not to mention that candles, fireplaces, kerosene lamps, etc. where much more common and much less protected than they are today.
Posted by Vern on 06/27/14 at 07:43 PM

At that time it was probably just another sales gimmick but today its required. What they used then was likely much more dangerous chemically than what is used now I bet.
Posted by Patty in Ohio, USA on 06/27/14 at 08:05 PM
Kids playing Indian might've tried shooting fire arrows or burning someone at the stake.
Posted by Phred22 on 06/27/14 at 09:34 PM
Nope, this was for real and quite new back then. Untreated cotton cloth, etc, goes up like a torch if/when it catches but the flame retarding agent used to treat kids clothing was pretty new. And, IIRC, didn't feel or smell that great either.

And, yes, lots of kids burned up in house fires, smoking or open flame incidents what would have been less severe if the cloth was 'flame proof'.
Posted by Expat47 in Athens, Greece on 06/27/14 at 11:17 PM
What you saw was not what you got. This post reminded me of X-ray specs. As a kid I wondered how they worked (or not). I checked wikipedia and they use chicken feathers to make you see double.
Posted by BMN on 06/27/14 at 11:42 PM
Cotton, not that much. It's inflammable, yes, but only moderately so. Nylon, now that's properly inflammable. Goes up like a torch and the residue sticks to your skin. And nylon was very popular back then.

Wool, btw, is fire-retardant. Well, it makes sense - have you ever seen a sheep on fire?
Posted by Richard Bos on 06/28/14 at 05:52 AM
Commenting is not available in this channel entry.