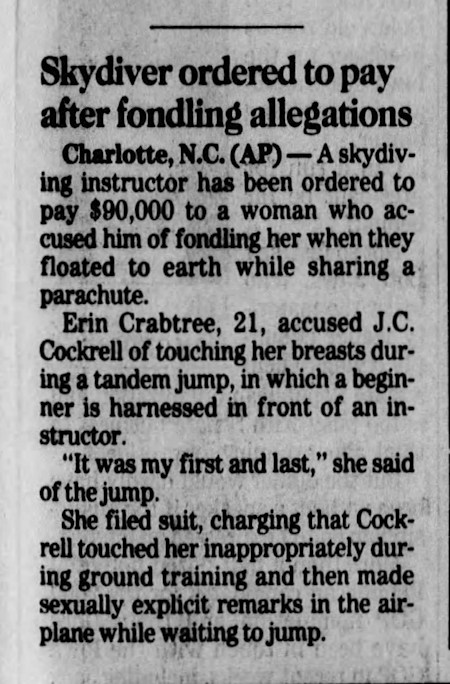 It sound like the guy started harassing her about the time he first laid eyes on her and kept it up even after she climbed into the plane with him and she still chose to have herself hooked up to him (you've seen how) and jump out of that plane into a condition she couldn't possibly control under any circumstances. THEN, and, seemingly, ONLY THEN did she choose to scream and holler.

Sorry, Frankie & Robbie, but this one's got a lot going for her KNOWINGLY placing herself into the situation.
Posted by Expat47 in Athens, Greece on 02/09/16 at 10:52 PM

Expat , I can guarantee you that the defense attorney threw every bit of slanderous mud he could at the victim. And a jury of 12 nonetheless UNANIMOUSLY found in favor of the plaintiff, even though she had the burden of proof. But I guess there will always be those who think victims of sexual crimes must have been asking for it, just because they didn't figure out fast enough just how bad the bad guy was.
Posted by Frank on 02/10/16 at 02:04 AM
Correction: no jury. The defendant failed to appear for trial, and thus effectively admitted liability. A judge issued the damage award. All as per that bastion of reliable journalism the Weekly World News.
Posted by Frank on 02/10/16 at 02:12 AM
Frank, I'm not saying what the sleezeball did was right but, then again, regardless of any eventual outcome, JUSTICE in this case would have HAD to attach a goodly portion of the blame for this eventual outcome to the woman who KNOWINGLY placed herself in the situation! If she were so naive or stupid to have allowed it to happen after any amount of forewarning by his previous actions then....

The mores of today seem to dictate that nobody is responsible for their own actions! This is reflected in almost every news channel, news paper, and discussion on the interweb. Now, if you can't (or won't) believe that then there isn't much anyone can do to change your view on this or any similar subject.
Posted by Expat47 in Athens, Greece on 02/10/16 at 04:55 AM

Et tu Expat
Posted by F.U.D. on 02/10/16 at 05:19 AM
Whenever I see something like this, I remember a case around that same time (maybe a little earlier) where a woman claimed a man sexually harassed her and was awarded a large settlement. A year or so later, they were both in jail for fraud.

His business was failing. On the verge of losing everything, he decided to get what he could while he could. His business insurance covered such lawsuits, so he had the woman make false accusations which he wouldn't deny. After the insurance company settled with her, they split the money. His reputation was ruined, but that didn't matter because he'd planned to move to a different state once his business folded.

I don't remember what tipped off the insurance company that it was a scam (did they get married? did she turn herself in? did he brag about what he'd done? -- nothing really jogs my memory). but they came down on the pair with a vengeance. I think she got 3-5, and he got 5-10. I know that when all was said and done, they owed nearly three times what she'd been awarded.
Posted by Phideaux on 02/10/16 at 05:59 AM
Men flirt all the time. To put the onus and total responsibility on the woman when a man finally proves himself an irresponsible, inconsiderate and sex-starved social misfit............speaks volumes about YOU.
Posted by Sensibilities on 02/10/16 at 10:04 AM
If the woman voiced her disapproval when he made advances on the ground, are you saying the woman should have known his mind would not allow him to respect her EVER.....and it's her fault ????
Posted by Sensibilities on 02/10/16 at 10:13 AM
So, "sleezeball" means something different in Iowa?
Posted by Expat47 in Athens, Greece on 02/10/16 at 11:00 AM
Let's see, he touched her inappropriately during ground training and made explicit remarks in the plane, yet she still strapped in with him. That's about as close as you can get to "yes", without saying it. He should've sued her for leading him on.
Posted by RobK on 02/10/16 at 12:41 PM
Did anyone else here ever read "The Scorpion and the Frog"
Posted by Phideaux on 02/10/16 at 12:59 PM
I know! Many men prefer the approach to 'touch every female' and if they say they don't like it just try again or just move on to the next. Every woman is open for groping.
Fortunately not all men take this egotistical and disrespectful approach to meeting a woman
Posted by Sensibilities on 02/10/16 at 03:14 PM
And if you meet a woman who DOES accept without a complaint, then you have met a sleazeball like yourself. Congrats !!!
Posted by Sensibilities on 02/10/16 at 03:18 PM
Page 1 of 2 pages  1 2 >
Commenting is not available in this channel entry.