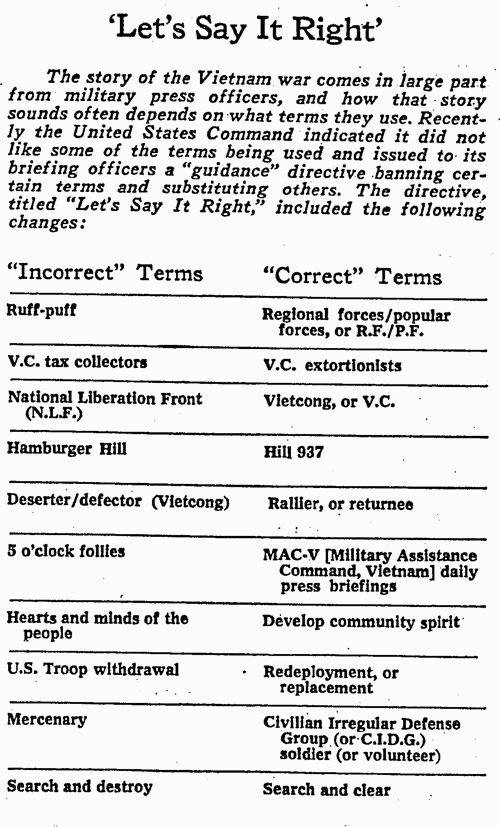 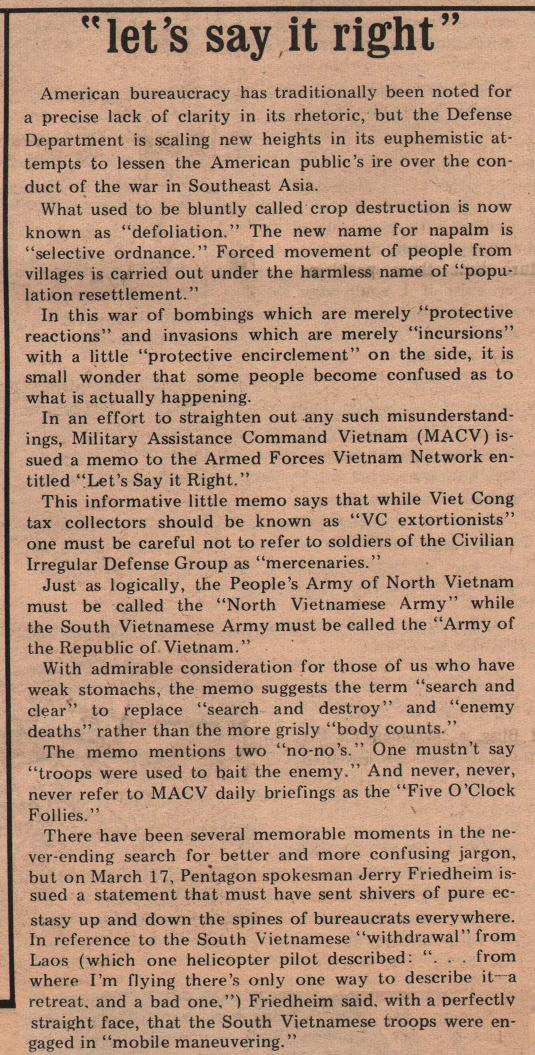 
Comments
This from the same bunch who called the Korean Conflict a "police action." When the bullets and bombs are flying, it is a war. Maybe undeclared, but a war nevertheless.
Posted by KDP on 11/04/16 at 12:52 PM
Are these the guys who coined 'friendly fire' for weaponry on our side killing our own people.

They may have roots back in the Spanish Civil War. Americans who fought against Franco were suspected of being communists before Pearl Harbor. Afterwards they were called 'premature anti-fascists'.
Posted by Phred22 on 11/04/16 at 03:21 PM

Apparently not, Phred22. A quick perusal around the 'net turns up only three references and it seems that it appeared in a journalistic sense during the First World War period. It does sound as if it would come out of the propagandists mind to soften the blow of having been wounded or killed by your own compatriots, though.

My war. The best was Five O'clock Follies. AFN the military radio station was a huge joke, we would listen and breakdown in tears of laughter it was so f*cking wrong. REMF was another. We flew into a rear base after a couple of week in the boonies. A West Point Captain in shined boots, starched fatigues and shinny helmet lined us up and got on our case for looking so bad. No bath or shaving for the duration did make us look bad. He singled out one guy and said what the hell have you been doing solider? The answer, Smoking gooks sir, someone had to do it. Come along next time. War is hell.
Posted by Gator Guy on 11/04/16 at 06:07 PM
I had a 'Nam vet for a housemate in here in the States, who had not gotten past the REMF thing one bit. He would go around at gatherings, looking for them. When he found one, he would get up in their grill but good. He got thrown out of a party or two, but felt better, I take it. I don't recall any actual assaults, but I think he got revenge for your WP captain, Gator Guy.

Apparently, they didn't have "attacking to the rear" until General Smith in the Korean War.
Posted by Virtual on 11/04/16 at 10:16 PM
Commenting is not available in this channel entry.