February 1978: A dolphin named Dr. Spock who lived at Marine-World swallowed a 3-inch bolt. The animal doctors there didn't have any instruments long enough to reach into the dolphin's stomach and remove the bolt. So, hoping to avoid surgery, they called up basketball player Clifford Ray of the Golden State Warriors and asked him if he would be willing to use one of his four-foot long arms to reach into Dr. Spock's stomach. Ray hurried over, removed the bolt, and saved Dr. Spock's life. Ray said that Dr. Spock later always recognized him when he visited Marine World and would come over to say hello. 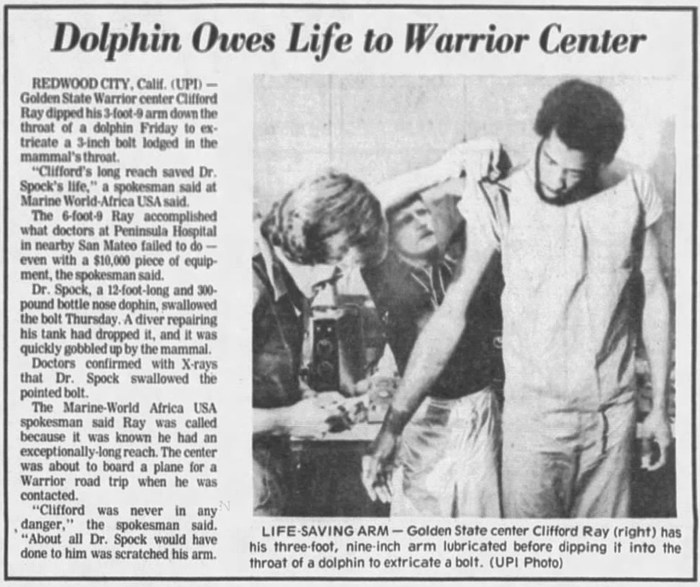 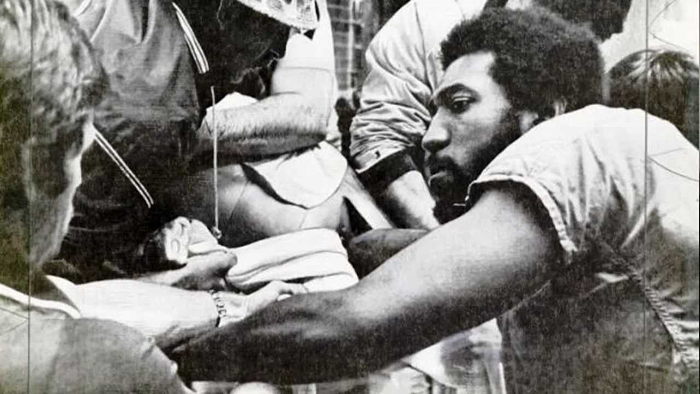 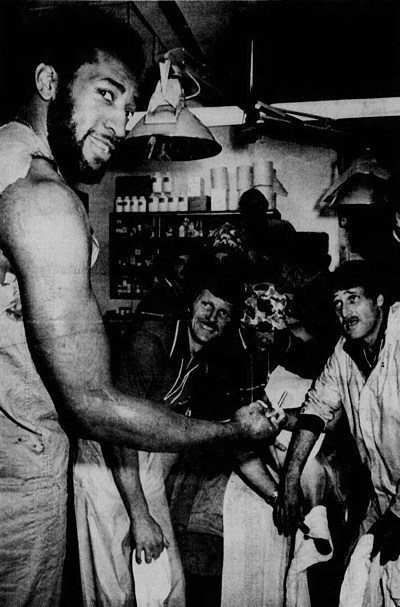 Ray shows off the bolt to his teammates
Hattiesburg American Sun - Feb 26, 1978

The world's tallest man has saved two dolphins by using his long arms to reach into their stomachs and pull out dangerous plastic shards.


Drew -- Amazing. I never would have guessed that long-armed men saving dolphins was a recurring theme in weird news.
Posted by Alex on 05/16/17 at 03:03 PM
Animals (humans included) will swallow the darndest things. We would slip magnets, cylindrical, about three inches by three quarter inches, down our cows gullets to catch small bits of wire used to bind hay bales that would fall into their feed. The magnets didn't move past the first chamber of their stomachs and would be retrieved at slaughter time.
Posted by KDP on 05/16/17 at 04:12 PM
@KDP -- Most people think you're putting them on if you talk about 'hardware disease' or 'cow magnets.'
Posted by Phideaux on 05/16/17 at 06:18 PM
I've heard of chick magnets, but not cow magnets.
Posted by ges on 05/16/17 at 09:35 PM
In case you are wondering, dolphins don't have a gag reflex. It could of been messy.
http://understanddolphins.tripod.com/dolphinhydration.html
Posted by BMN on 05/16/17 at 09:54 PM
I worked in a hardware store in the 80's and there was a rumor that went around that taping cow magnets around your fuel line increased gas mileage. We sold more cow magnets that summer than ever before. There was also something going around about the same time about using DMSO for joint pain.
Posted by RobK on 05/17/17 at 10:30 AM
Commenting is not available in this channel entry.