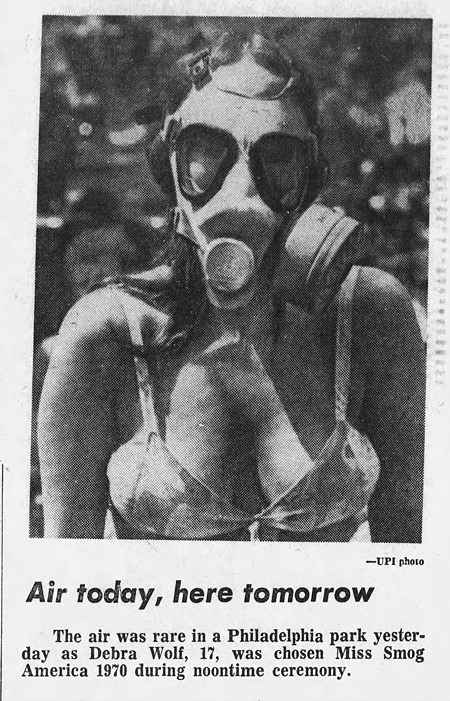 
Comments
With a title like "Miss Smog" you expect something like watching Pigpen from the "Peanuts" cartoon ambling along.
Posted by KDP on 03/23/18 at 04:36 PM
On the recent theme of falsies, the Philadelphians found a way to avoid that problem.
Posted by Virtual on 03/24/18 at 07:32 AM
So we have a Miss Smog and a Miss Smog Fighter. When are we going to have a fight between them? Where is the comic serie? The animated movie? The merchandising? We need a GoFundMe page and a good cartoonist! This is gold!
Posted by Yudith on 03/24/18 at 09:49 AM
So what was Proposition C that Miss Smog was supporting?
Posted by Brian on 03/25/18 at 07:47 AM
Helene Stanley was a somewhat famous Hollywood starlet, Walt Disney selected her to be the model for Cinderella and Snow White... She spent two years "going through the motions" while the Disney cartoonists captured her every move. She had recently divorced the gangster that Lana Turner's young daughter stabbed to death in what was a huge Hollywood scandal of the 1950s.
Posted by Lone Ranger on 03/26/18 at 12:57 AM
Brian -- Proposition C apparently allowed the city of Los Angeles to use $500,000 of $2,100,000 already approved in a 1947 bond issue for remodeling an incinerator on Lacy St. to bring it up to standards and make it less polluting. Seems that it passed.

I found an article which goes into more detail about the incredibly obscure subject of the "History of Efforts at Incineration in the Los Angeles Area":

Also, the Lacy St. incinerator is now used as a film set: