Milford Barnes was the Head of the Department of Hygiene and Preventive Medicine at the University of Iowa from 1930 to 1952. The annual Milford E. Barnes Award for Academic Excellence in Biostatistics was established in his honor. He made this prediction in 1934. Evidently, he was an optimist. 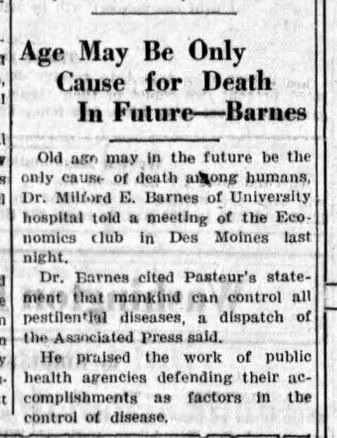 
Comments
No... Mankind is going to be dying from copious amounts of stupid for many, many moons to come. For example: Measles - we had it beat then stupid took over.
Posted by Expat47 in Athens, Greece on 10/16/13 at 08:16 AM
I can't remember who to attribute the following, but they have been always in my mind about death:

That guy was some kind of optimist!
Posted by Slippsliding on 10/16/13 at 01:03 PM
Life is great now. I fly to work on my rocket pack although most of my work is done by robots. Poverty and hunger have been eliminated. And we are a unified earth instead of separate waring countries. If they only knew of the internet as well back then.
Posted by BrokeDad in Midwest US on 10/16/13 at 02:18 PM
So much for living fast, dying young and leaving a good-looking corpse.
Posted by Harvey on 10/17/13 at 01:13 AM
Actually, we aren't too far from it (except for stupidity as mentioned by Expat47) in the first world countries.

From the stupidity angle, cars are much safer, there's less death from accidents, etc. If you eliminate murder, stupidity, and accidental death, your chance of dying of "old age" (degenerative health conditions) is pretty good now.

People still die of some diseases, but generally speaking most have become at least treatable.

Less developed and poorly run countries still need help with that, though.
Posted by Kyle Morgan on 10/17/13 at 10:27 AM