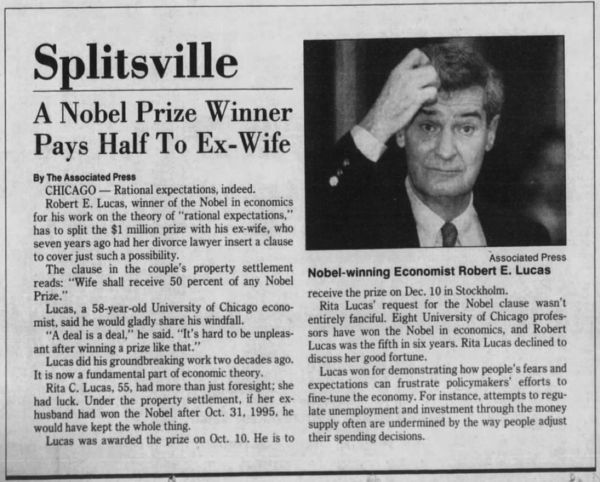 
Comments
And she's not been burned as a witch?
Posted by Expat47 in Athens, Greece on 08/25/16 at 09:01 AM
My sister got a very similar arrangement when she divorced her first - but his lawyer and the ex didn't notice that half of his Navy pension would go to her until he retired after his twenty years. By the time he realized the clause in the agreement it was too late, he had already signed the agreement. Apparently he thought that all the proceeds would be his, which was not a insignificant amount.
Posted by KDP on 08/25/16 at 09:17 AM
I must say this post made me chuckle a little. I wonder how he felt about it after the initial feeling of awe wore off. I couldn't imagine that happening to me, especially with the fact that if it had been won just 3 weeks later he would not have had to share any of it.
Posted by Conrad on 08/25/16 at 01:14 PM
And this is supposed to be one of the world's best economists...
Posted by Richard Bos on 08/25/16 at 03:43 PM
Actually, Albert Einstein, when he divorced his first wife, specified that, should he ever win the Nobel Prize, that all of the cash amount would go to her. He would keep the medal, the certificate, the honor, and the chance to shake hands with a king.

She used the money to buy three apartment houses in Switzerland, which she managed, and which supported her, for the rest of her life.
Posted by Joshua Zev Levin, Ph.D. on 08/25/16 at 04:06 PM

Aren't most prize winners pretty much self sufficient by the time the get the prize?
Posted by GFinKS on 08/29/16 at 11:26 AM
Not always. The prize money is supposed to go for continued research, but there are no official strings attached.