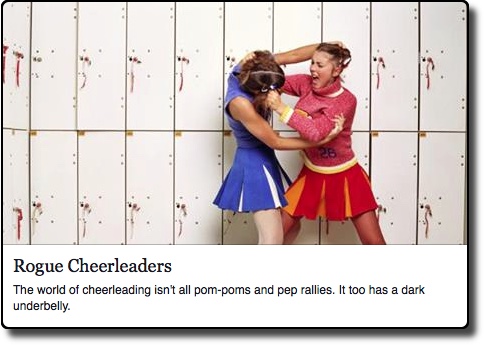 
Comments
Rest assured that usually those "popular" kids who wouldn't give you the time day end up in dead end jobs, overweight, divorced three times and enough kids to start a baseball team.

That cheerleader/armed robber story reminded me of a Julie Brown tune where part of the chorus was:


Odd coincidence -- last night I was alerted to the existence of: "Satan's Cheerleaders" (1977).
Posted by Phideaux on 09/30/15 at 06:36 PM
Sounds like I should be watching cheering instead of hockey!
Posted by Expat47 in Athens, Greece on 09/30/15 at 11:54 PM
Today, Cheyen Weatherly would be made homecoming queen and given an ESPY award.
Posted by RobK on 10/01/15 at 11:26 AM
I knew I'd run across Elizabeth Maddex's story before! "Sugar & Spice" (2001) has the same plot. I don't know if the movie was in any way based on her. Although a box office bomb, it's a neat little movie for what it is (I recommend someone watch it if it crosses their path, but it isn't the kind of movie to bothering searching for or buy a DVD sight unseen).
Posted by Phideaux on 10/01/15 at 02:18 PM
Just remembered, what about the cheerleader mom who had her daughter's competitor's mom killed to put the girl off her game and let her own daughter win a spot on the squad. Twisted!
Posted by Patty in Ohio, USA on 10/01/15 at 03:42 PM
KDP is right. At my 10th HS reunion all the perky, pretty girls had bulked up considerable, were cruising for new husbands and their personalities had not changed a bit. I understand the adult film industry has a collection of cheerleader themed movies and are always looking for new talent.

At Colorado State University, Cow College, at the 1974 home coming, much to everyone's surprise a bisexual guy was elected homecoming Queen. Most every one boycotted the parade and the king, the usual all American white guy refused to walk arm and arm with her/him or dance at the dance. Considering the time it was a radical event. It was the same year the college hosted a gay film festival, understandably poorly attended. CSU was 2/3 male and had a big farming/ranching/engineering and forestry program at the time.
Posted by Gator Guy on 10/02/15 at 07:07 PM
Commenting is not available in this channel entry.