Another Google ad, this one somewhat more dubious:

For those of you who don't know, Brandon Tartikoff was an NBC executive in the 1980s.

Next, we have a few bizarre suggestions from Netflix (if any are too small to read, simply right click and open the image in a new page):

I give up, what do The Powerpuff Girls and Star Trek: The Motion Picture have in common?

I don't know what's stranger, the related movies or the fact that this is one of the results for the search "Breakfast at Tiffany's" (Don't believe me? See for yourself)


And finally, an announcement. Over winter break I came into possession of a machine that was almost literally built to spread weirdness. I am of course referring to a 16mm movie projector. I only have a few mildly weird films at the moment, such as a 1940s John Deere farm safety film and a Bell Telephone Company film that reminds businesspeople to dial their own calls and not bother the switchboard operator, but over the next few months I should be able to find more weird and wonderful films to share with the world. As soon as I figure out a good way to transfer 16mm films to my computer I will start uploading some of the weirder films in my small collection.

For anyone who may be interested, here is a picture of the projector (I'm still waiting for the films to arrive, I got them during winter break in Houston and it is taking a while to have them shipped to Chicago): 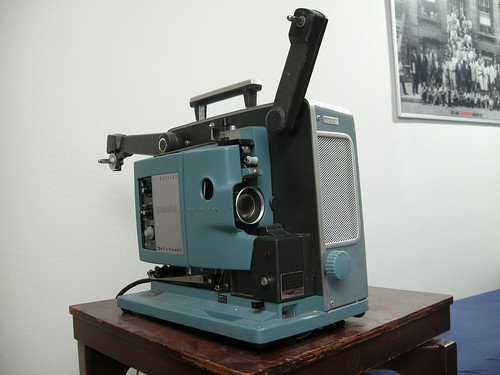 
Comments
welcome back sam 😊 I'm eager to see the john deere farm safety film, so hurry up and get those films!
Posted by Nethie on 02/06/10 at 09:59 AM
so glad to have you back sweetheart! the projector is cool, i'm looking foreward to your film posts.

poor brandon tartikoff, from a multi million dollar executive to a cheap whore on amazon.
Posted by Patty in Ohio, USA on 02/06/10 at 11:16 AM

Sarah, I'm an animation major and Salamander Sam is a character I created. I've been posting under that name for a while now, I guess you just never noticed the similarity. I must confess though, apart from having green skin, Salamander Sam isn't much of a Salamander (though he can transform into a lizard when he needs to).

Nethie, here's a little more background information about the John Deere film, since you seem interested: It looks like it is from the late 1940s, though the print I have was made in 1953. It's filmed in Kodachrome, so the colors are just as vibrant and sharp as the day it was made. The main plot point is a "Safety Pin," event where the local youngsters try to find safety violations on a farm and pin up notices warning the farm owner of things like a blown fuse replaced with a penny and an ungrounded washing machine. The second part of the film is a lecture on tractor safety, using a small remote controlled tractor to show the dangers of improper use. I will probably upload it in two parts, because it is about 45 minutes long and because the film broke near the midpoint (before I got it). I'm not sure when that film will get here, but when it does I will make sure to transfer it right away.
Posted by Salamander Sam in Chicago on 02/06/10 at 03:02 PM