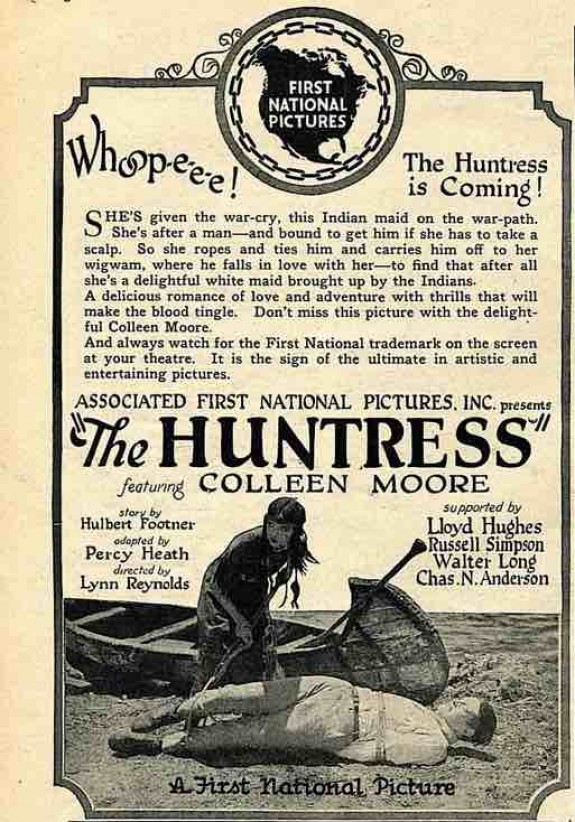 
Comments
The book is available from The Gutengerg Project for free.

I looked and while I found plenty of references to this movie I couldn't find a copy to either watch on line or d/load. Oh well, read the book.
Posted by Expat47 in Athens, Greece on 01/03/16 at 09:36 AM

Another victim of the PC police I'm sure. Whatever happened to the saying 'Those who forget the past are doomed to repeat it.' ? They want to wipe everything out like it never existed, so what will be the outcome of that down the road?
Posted by Patty in Ohio, USA on 01/03/16 at 11:25 AM
Collen Moore more is playing a white woman who was raised by Indians. She is not playing an Indian.
The reason she could not get a husband was because she is white. So she kidnaps a white man. The man at first thinks he has been kidnapped by an Indian woman. When he realizes that the woman is white he falls in love with her.
Posted by Susan on 01/03/16 at 03:47 PM

Yeah, nothing racist there.
Posted by Patty in Ohio, USA on 01/03/16 at 08:13 PM
Hello? Dances With Wolves.
Posted by Greg on 01/03/16 at 10:21 PM
Patty, it seems likely that the film was lost. I found a filmography that lists all of her films along with the number of reels where that information was available, and it has a question mark for the number of reels for The Huntress. I also found comments about some newly restored Moore film along with a comment along the lines of "I wish it had been The Huntress."
Posted by ges on 01/04/16 at 12:14 AM
@Patty -- White men of the time feared Native American women because of the risk of 'death by snu-snu.' The revelation that she was white meant she wasn't dangerous.
Posted by Phideaux on 01/04/16 at 03:20 AM
ROTFLMAO!!!!!
Posted by Patty in Ohio, USA on 01/04/16 at 06:57 AM
Commenting is not available in this channel entry.