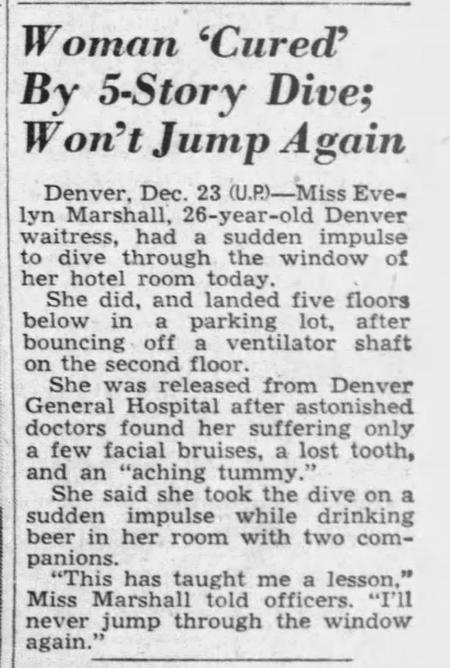 Woman 'Cured' By 5-Story Dive; Won't Jump Again
Denver, Dec. 23 (UP) — Miss Evelyn Marshall, 26-year-old Denver waitress, had a sudden impulse to dive through the window of her hotel room today.
She did, and landed five floors below in a parking lot, after bouncing off a ventilator shaft on the second floor.
She was released from Denver General Hospital after astonished doctors found her suffering only a few facial bruises, a lost tooth, and an "aching tummy."
She said she took the dive on a sudden impulse while drinking beer in her room with two companions.
"This has taught me a lesson," Miss Marshall told officers. "I'll never jump through the window again."


Comments
Just drinking a little beer...un-hunh...right...wink, wink.
Posted by Virtual on 06/26/16 at 02:21 PM
That was my thought too. I wonder what the real motivation was.
Posted by TheCannyScot in Atlanta, GA on 06/26/16 at 05:24 PM
LSD, thought she could fly. That has happened before and it is easier to admit drinking than drugs. Who knows.
Posted by Patty in Ohio, USA on 06/27/16 at 02:13 PM
Not LSD, I don't think, in 1951. It existed, but it wasn't used (that I know of) as a recreational drug by civilians yet. The US Army (maybe MK-Ultra?) had just started trying it out, and the recreational use developed from those programs. But other psychedelics were available - peyote, for one.
Posted by Richard Bos on 06/27/16 at 04:47 PM
Commenting is not available in this channel entry.