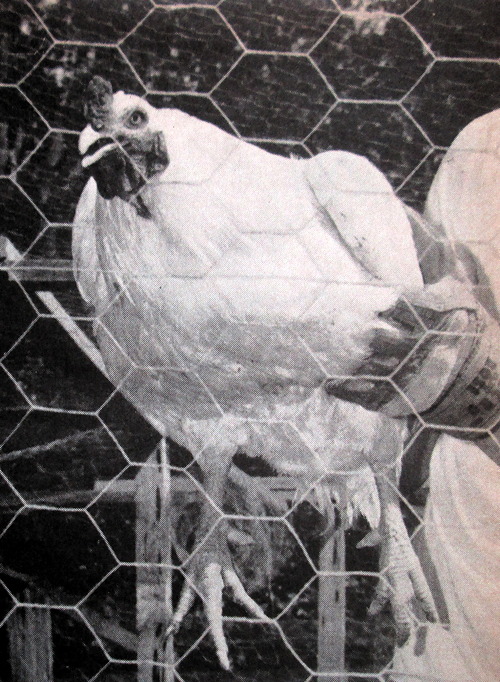 Just as unusual as Weirdo himself was the story of how he came to exist. He was the result of a seven-year chicken-breeding program conducted by a teenage boy, Grant Sullens, of West Point, California. Sullens had decided that he wanted to create a breed of "superchickens," and he actually achieved his goal, succeeding where highly paid poultry researchers had failed.
Creating Superchickens
The superchicken story began in 1964 when Sullens' father was playing a game of dice in a saloon. He won the game, but his opponent didn't have enough money to cover the bet. So instead he offered Sullens Sr. three hundred leghorn chickens. Sullens accepted the chickens, took them home, and gave them to nine-year-old Grant, telling him, "Feed 'em or get your tail warmed." 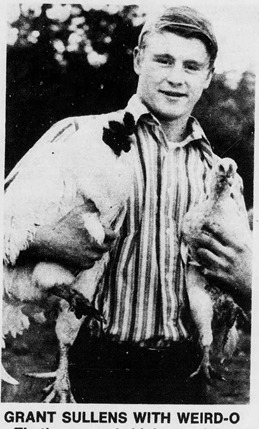 The chickens stayed in a pen outside the Sullens' West Point home, but the first winter half of them froze to death. This made young Grant wonder whether it would be possible to breed hardier chickens that could withstand the cold winters in the Sierra Nevadas. So without any prior experience, he launched into his amateur chicken-breeding program.

Grant didn't have much in the way of equipment — just a microscope and some tin-can incubators. But with help from his high school agricultural advisor, he began crossbreeding seven different strains of chickens, including Rhode Island Reds, Plymouth Rocks and Austrian Cross Whites. He never revealed the exact mix of chickens he used, both because he wanted to keep this a trade secret and because he didn't keep detailed records.

Five years later he had created the superchicken. He called the new breed the "White Sully," after himself.

Grant boasted that his White Sullies were superior to other fowls in almost all ways. They grew fast and big. Their meat was solid but tender. They didn't develop cancers or show any signs of imperfection in their bone structure. They were impervious to weather. The hens continued to lay big eggs in both hot summers and cold winters. And finally, they seemed immune to disease.

The one catch was that the superchickens were mean. Really mean — both the roosters and the hens.

But Sullens thought their aggression could potentially be a benefit, since farmers wouldn't need to worry as much about predators. He even envisioned their use as "watch-chickens," noting that a watch-chicken would be better than a watchdog, since it would not only protect the house, but also lay eggs.


The Birth of Weirdo
Weirdo, the King of the Superchickens, was born in 1970. Grant noted that the egg he came from was heavier and rounder than any other egg he'd seen, and after laying the egg, Weirdo's mother never laid another again, as if too worn out by the effort. 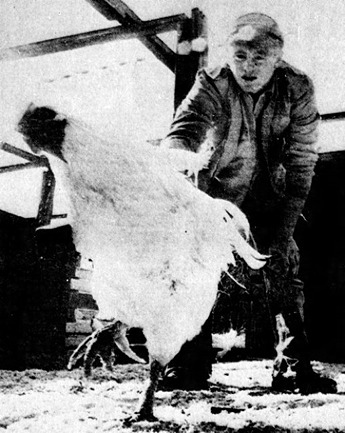 Weirdo grew faster and bigger than any other rooster. When he was only eighteen weeks old he was already being mistaken for a three-year-old rooster.

Grant explained that he named him Weirdo "because what else could you call something like that."

Weirdo was built like a tank. Sullens said, "I've kicked this rooster, hit him with a feed bucket, and slugged him when he got me down, but I haven't hurt him one bit." Weirdo returned the favor by causing Grant to have eight stitches.

But the constant fighting took a toll on Weirdo. By the age of three, he was pretty well beaten up, with his comb almost entirely gone. However, he remained as tough and mean as ever.


Selling Superchickens
Grant had high hopes for his superchickens. He imagined that the breed would revolutionize chicken production and help feed the starving people of the world. "They aren't just oddities," he insisted. "They're real meat producers."

However, Grant didn't want to breed them himself. By 1973 he was finishing high school and wanted to get out of chicken raising so that he could attend college. So he tried to find a buyer. 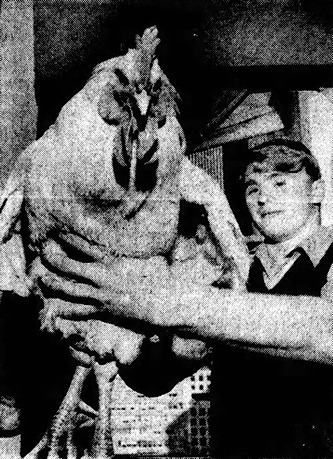 As the word spread about Weirdo and the superchickens there was a lot of interest — but mostly from the media. Reporters flocked to his home to take pictures of Grant with his strange, hyper-violent chickens.

Also, the chicken industry may have had a hard time taking Grant's superchickens seriously. Grant's father claimed, "They can't believe a young boy has done what they haven't been able to do with sophisticated research facilities."

Grant did receive offers from people who were interested in buying his superchickens to use as fighting birds, but he turned these offers down. It doesn't appear that he received any offers from commercial chicken breeders.


The Fate of the Superchickens
After 1973, Grant and his superchickens fell out of the news. It's not clear what became of Weirdo, or the White Sully breed. Only a few scraps of information can be found.

For instance, in 1980 the filmmaker Errol Morris wrote up a treatment for a movie titled Weirdo, to be about "Grant Sullens: the developer of the super-chicken." But the movie never got made.

And around 1990 the Guinness Book of Records recognized a chicken named "Big Snow," owned by Ronald Alldridge of Australia, as the new heaviest chicken in the world. Big Snow was none other than a White Sully. So at some point some of Grant's superchickens evidently made their way to Australia.

After that, the trail goes cold.

On Internet message boards frequented by chicken enthusiasts, occasionally someone will still ask for information about White Sullies. Are there any still around? Does the breed still exist? To date, their questions remain unanswered.


Comments
I think this was probably the one that was on Johnny Carson once. Huge thing. Way pre-Internet, so it wasn't easy to look into except the newspaper hype, but I remember running across a quote from someone in the industry who said the eggs were useless -- they wouldn't fit standard handling/grading equipment, and they couldn't be sold as fresh eggs because they'd seriously throw off any recipe calling for "2 eggs."
Posted by Phideaux on 11/18/19 at 02:58 PM
Of Rex Goliath, you say nothing?


I hadn't heard of Rex Goliath! But yeah, I don't find any references to him in a news archive search. So maybe an invention of the winery.
Posted by Alex on 11/19/19 at 08:27 AM
West Point, California is about fifty miles from Stockton in the Sierra foothills. In the early 1970's it was more of a wide spot in the road and the population lived in the surrounding hills. With very little to occupy their time it is no wonder that a young boy would take on experimenting with chickens. You must admire Sully's intuitive grasp of genetics.

In that first picture it appears that the rooster still has his spurs. No wonder it was a formidable fighter.
Posted by KDP on 11/19/19 at 01:19 PM
Commenting is not available in this channel entry.