In 1982, the Maryland Poison Center reported almost 80 cases of people who had suffered nausea and diarrhea after drinking Sunlight dishwashing liquid. They had received free bottles of the stuff in the mail as part of a promotional campaign. The source of the confusion was a picture of lemons on the label as well as the phrase "with real lemon juice." This led many to conclude that the bottle contained some kind of lemonade. Or a lemon-flavored drink mixer. A lot of people added it to iced tea.

A spokesman for Lever Brothers, the manufacturer of the product, noted that the bottles also clearly said, "Sunlight dishwashing liquid."

Sunlight no longer uses the phrase "with real lemon juice." Apparently they learned their lesson. But they've still got a picture of a lemon on their bottles. 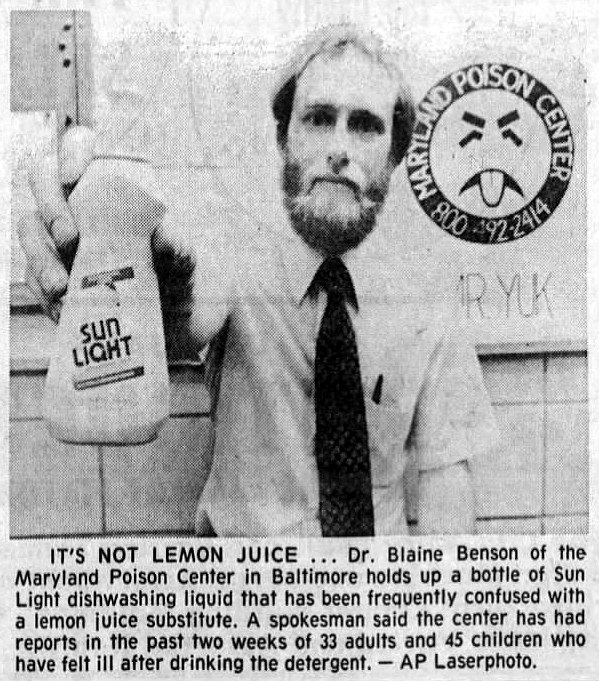 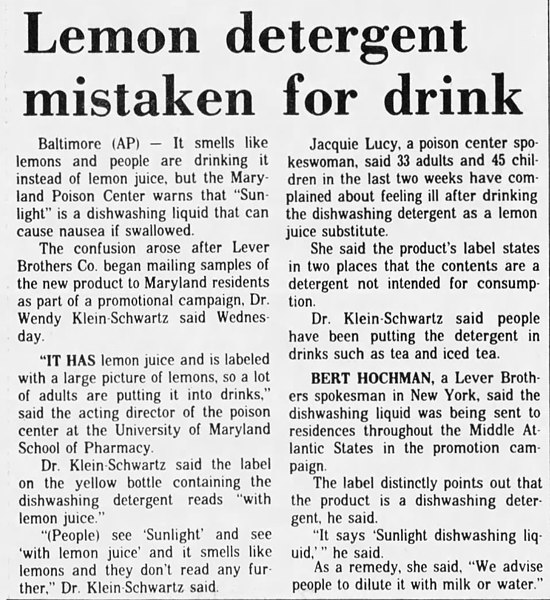 The bottle that caused the confusion

In defense of the people who drank the stuff, I came across a columnist, Dorothee Polson of The Arizona Republic, who had warned in March 1980, at the very start of Sunlight's promotional campaign, that the bottle was potentially confusing. She wrote:


I think there should be a law against such packaging. The plastic squeeze bottle is bright lemon-yellow; the label carries pictures of the whole and cut-up lemons. Above them is the word 'New,' and below them the words 'with Real Lemon Juice'... The words 'dishwashing liquid' are the smallest words on the label... The appearance (is) similar to that of real lemon juice available fresh or frozen in a yellow plastic bottle.

I know at least one adult who tasted Sunlight, thinking it was lemon juice. And she can read very well.
Polson later received letters from readers who had mistakenly added the dishwashing liquid to their food. From her June 11, 1980 column:

"I am another of those Sunlight disasters," she wrote. "After work, hurrying to prepare dinner, I grabbed the sample bottle that had been left at the front door, quickly read the label, and proceeded to pour 'real lemon juice' all over my 24 pieces of chicken.

"I had to waste my dinner; my family wound up eating eggs and toast. Needless to say, I will never buy this product." 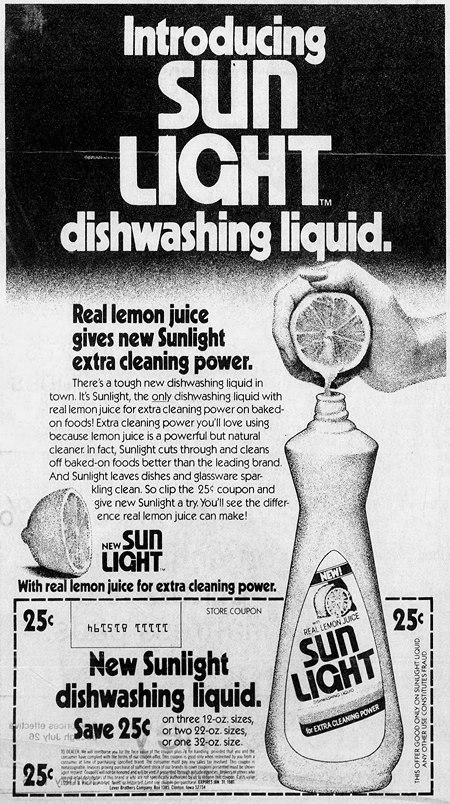 
Comments
Many federal government agencies could benefit by adopting the Maryland Poison Control Center's Mr. Yuk logo.
Posted by Virtual on 01/20/18 at 11:04 AM
At this point, you're surely wondering about the woman who sued a pharmacy from which she bought contraceptive jelly because she became sick and pregnant after eating the jelly on toast. Alas, Snopes says it's untrue.
https://www.snopes.com/pregnant/jelly.asp
Posted by Virtual on 01/20/18 at 11:18 AM

@Virtual -- "House" (Season 2, Episode 9) had a scene where a young woman had an infection from using jelly for birth control. Strawberry jelly. Loved it! But, sadly, you know that somewhere, at some time, there have been women who made that same mistake.

One place I worked, a new dipstick developed a skin problem from exposure to the chemicals on the plating line (he wasn't wearing the gloves properly). Plant nurse gave him some chamomile lotion. An hour later, they had to call an ambulance for him because of stomach cramps. Yep, that's right, he drank it!

While management scrambled to cover up the fact the nurse hadn't instructed him clearly on how to use it, we all said that if he'd seen the "external use only" warning, he'd have stepped outside to drink it (no matter the shortage of workers, they never put geniuses in the plating department.)
Posted by Phideaux on 01/20/18 at 12:07 PM

This may be an urban legend, but I can see that it could be true. Newly arrived immigrants that have no knowledge yet of the local written language have bought pet food because the label has a chicken on it.
Posted by BMN on 01/20/18 at 12:31 PM
This would be perfect for washing down your Tide pod snacks.