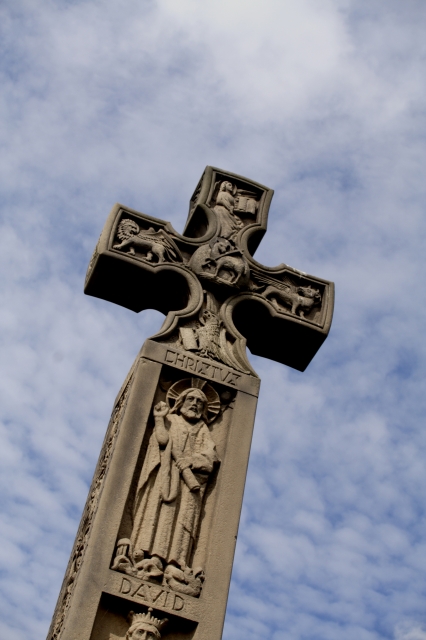 With four religions down, let's turn now to Buddhism and Kansho Tagai, a monk at the 400 year-old Tokyo temple has started delivering his message in rap, under the name MC Happiness. Tagai claims to have been inspired by rap in English, which he says he enjoys despite not knowing a word of the language (KSDK).

But if you think that Buddhist rap is just a fad, and you're a Christian, then perhaps you need reminding of the beam in your own eye? Rick Warren seems to think so. In an interview the pastor of 30 years bemoaned the many fads and techniques that he claims diverted churches and ministers from Christ, essentially leaving them “spiritually rootless” (Christianity Today). And he may have a point, in a recent survey one third of Presbyterians said they believed there might be other paths to salvation besides Christ, despite the opposite being a central tenet of that church's beliefs (USA Today).

But whatever god or gods you believe in, the majority of the world's population don't, so it is ever so slightly weird that one of the least acceptable beliefs is to not believe in any god. So when unabashed atheist Cecil Bothwell won a seat on the city council in Asheville, North Carolina, his opponents weren't content to leave the matter with the will of the voters, citing an 1868 provision of the NC constitution that bars unbelievers from office. This despite such religious tests being ruled unconstitutional by the Supreme Court in 1961 (AlterNet). Meanwhile in the UK, atheist politico and favourite of Hillary Clinton, David Miliband, has been getting some stick from the the press for sending his adopted son to a religious school. Miliband, who is married to a Lutheran, was one of only two UK ministers to openly state their lack of belief in the wake of former Prime Minister Tony Blair's conversion to Catholicism on leaving office (Daily Mail).

Finally, some recent scientific results may have brought us a step closer to the source of some people's deepest spiritual beliefs. No not God, brain damage. Dr. Urgesi of Udine University in Italy looked at a personality trait called “self-transcendence” in people about to undergo brain surgery, and by comparing it with measures of the same trait taken afterwards has discovered that selective damage to the posterior parietal regions of the brain dramatically increased a subject's spirituality. Supporters of the work believe it may even lead to new treatments for certain mental illnesses, which is a brave thing to say in a predominantly Catholic country (Science Daily).

Extra: Surely brain damage is the only explanation in the case of the presenter on UK Christian channel "Genesis TV" who was tricked into reading out two successive spoof testimonials. The first was nothing more than a slight rewording of the opening rap from the comedy show The Fresh Prince of Bel-Air, but on realising this the presenter quickly moved on only to later read out another testimonial from a young man who had been inspired by one "Ben Kenobi" and had hence come to know "the force" of spirituality (Telegraph).


Comments
Judge Singh Wouldn't it actually be discriminatory to ban someone from carrying a knife because they were not a Sikh? Or am I missing something? 😖
Posted by Dumbfounded on 02/14/10 at 08:31 PM
knives- absolutely right dumbfounded. hey, maybe hunting before school is part of tha kid from last week's religion and therefore he should be allowed to bring his gun to school.

predug graves- i'm sure the gravediggers union won't allow anyone else to dig the graves or the workers to work on the weekend so an open hole for people to fall in is the best solution.

parking lot/graveyard- if nobody had a problem with the parking lot why are they freaking now?

rapping monk- beig a religious man, if he could understand the words he wouldn't like it anymore.

religious fads- salvation without christ? i once heard there was a jewish sect that believes in jesus, so that's no stranger.

atheists- freedom of religion includes freedom FROM religion as well. if these people are voted in then they should get to serve.
great post sweetie!
Posted by Patty in Ohio, USA on 02/14/10 at 09:39 PM

Proof enough for me that there isn't a god. At least, not a benevolent one. :down:
Posted by Dumbfounded on 02/15/10 at 11:20 AM
I have just noticed I actually left out my favourite "beyond belief" story while rushing to put this post up. Fixed.
Posted by Dumbfounded on 02/15/10 at 12:05 PM
that makes the complaints more understandable then rob.
catholic guilt has been spoiling fun for centuries honey.
most born agains have no sense of humor and consequently wouldn't recognise a joke if it ran up and bit them in the ass.
Posted by Patty in Ohio, USA on 02/15/10 at 03:41 PM
I decided to be as neutral as possible on this post, so didn't pass judgement on the merits of either side's claims, but it certainly does look like this is not a new issue, just a new chapter in an old one.

Mind you, I appreciate the point made in the article that just about everywhere you dig in Jerusalem you hit something historic or sacred to one or other Abrahamic religion. But when you consider how strongly Jewish communities object to interference with or vandalism of Jewish cemeteries in Europe, I might have hoped for a bit more understanding than appears to have been displayed.
Posted by Dumbfounded on 02/15/10 at 06:04 PM
Sadly, my attempt to be "fair and balanced" ended up a FoxNews-level farrago when I couldn't find any really funny or weird atheists. Boring ones were to be found a plenty, but nothing particularly struck me as demanding of inclusion. Being an atheist myself I can't help but feel that the "atheist being persecuted"/"atheist practises freedom of belief" duo very much smacks of favouritism.

I almost chose "Atheists As Ethical as Churchgoers" and "The Atheist 10 Commandments" (you can see how that'd work, atheists -> churchgoers -> commandments), so perhaps I shouldn't be wringing my hands like Uriah Heap over this.

But damn it I'm disappointed. Come on atheists, are we dull to a man? Someone please stop letting the side down and do something to let the side down!

"Really," objected the woman, "that is no way to talk about a man of the cloth!"

"Let me speak to the head hog," the man repeated, "I want to donate $100 thousand to the church fund."

Quick as a wink he hops out of the boat and carefully walks across the water to the shore, returning with the bait the same way. But just as he sits down the Catholic jumps up, smacking his forehead and exclaims "By the saints, I've left our lunches in the trunk of the car!"

Just like the Baptist, he jumps out of the boat and walks to the car and back. The Catholic is not even in his seat when the atheist jumps up and yells "If you can damn well do it, so can I," and proceeds to step out of the boat onto the water, where he sinks like a stone.

At this point the Baptist turns to the Catholic and says "Should we have told him where the rocks are?"
Posted by Dumbfounded on 02/16/10 at 12:36 PM
the second one is the funniest! :lol:
Posted by Patty in Ohio, USA on 02/16/10 at 03:50 PM
Commenting is not available in this channel entry.