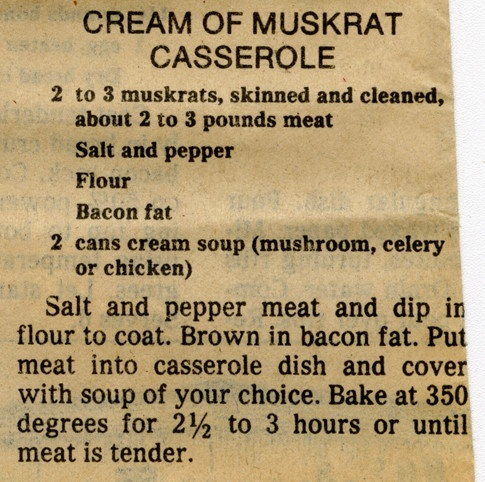 I've helped trap these things and, yes, they're meat but I think I'd get a whole life long love affair going with some veggies first.
Posted by Expat47 in Athens, Greece on 09/09/13 at 10:20 AM

Yeah, I've been on a weird food kick recently, partially motivated by the fact that I recently discovered that my local supermarket carries a whole bunch of exotic meats, in a freezer tucked away in the corner of the store. So I had bison steak last night. Plan on kangaroo burgers next weekend, and ostrich the week after that.
Posted by Alex on 09/09/13 at 01:38 PM

I had bison steak last night. Plan on kangaroo burgers next weekend, and ostrich the week after that.

Ok or deer but rodents are gross.
Posted by Patty in Ohio, USA on 09/09/13 at 03:50 PM
We are omnivores, BUT you can't get me to eat mystery meat like spam or raw fish. Muskrat should be just like rabbit, which I haven't tried etheir.

I have eaten garden snails ~ ESCARGOT ~ but not again!
Posted by Skyte on 09/09/13 at 04:30 PM
I've never had muskrat. I've had squirrel, rabbit, dear, groundhog, bear. Properly prepared, it was all very good. But then, my mother was raised to prepare such things. She is long passed, so cannot ask her about it. It does sound good. I've never had brains, either, but my grandfather like squirrel brains. The recipe does sound interesting. As I get older, I get tired of the same old thing all the time.
Posted by mikeym on 09/10/13 at 03:24 AM
Mmmmmmmmmmmmmmmm Bacon Fat
Posted by Homer on 09/10/13 at 10:02 AM
Uncle Jedd, Granny wont let me have seconds on the mushrat.
Posted by Jethro on 09/10/13 at 10:04 AM
Growing up in a small village in Vermont, I had squirrel pie, rabbit stew, pheasant and deer. I hunted most everything except deer.

The Supply Officer on the ship arranged for Hasenpfeffer once Easter dinner.

I'm pretty adventurous, but some of the stuff I tried in Japan didn't so much taste bad, but the texture was just wrong. I don't do slimy very well.

I also passed on Balut(fertilized then fermented duck egg) when I was in the Philippines. I always figured that was just a joke on the tourists/Navy. As it was pre-Google, I didn't have the means to clarify.
Posted by Billy on 09/10/13 at 10:14 AM
The recipe left out the garnish - fresh picked Goldenrod.
Posted by tadchem on 09/10/13 at 02:30 PM
Ever since the hateful muskrat was introduced to Europe from the Colonies, it's been on Belgian menus. Often it's there under the (somewhat inaccurate) name of "water rabbit", but it's there. I have yet to try it myself, but if the Belgians, as cooks second in Europe only to the Italians, eat it, I'm willing to believe it's good. Anyway, the d#&^ed vermin destroy our dikes, so the more end up in the pot the better.
Posted by Richard Bos on 09/11/13 at 08:05 AM
You're not looking on the bright side of this, Richard, without the lowly muskrat you guys wouldn't have any place to stick your thumbs! 😛
Posted by Expat47 in Athens, Greece on 09/11/13 at 08:18 AM
Heh. Whoever wrote that story (some New Englander of Sassenach stock, IIRC) never saw a dike up close. Consider: if the water is coming in, and you stick your finger (or even a proper plug) in this end, what happens?
Posted by Richard Bos on 09/11/13 at 09:23 AM
What??? You mean all those cold nights I walked the levies along the banks of the flood swollen Mississippi and saw those dudes lined up with their fingers plugging up muskrat and (worse yet) groundhog holes that they weren't doing any good?
Posted by Expat47 in Athens, Greece on 09/11/13 at 09:31 AM
Sure they were! They were keeping that many rednecks out of trouble...
Posted by Richard Bos on 09/11/13 at 09:46 AM
Commenting is not available in this channel entry.