In September 1966, the first ever "Destruction in Art Symposium" was held in London, highlighting the work of the self-styled Destructivists. Basically, they destroyed things and called it art.


The artists say they create by demolishing objects and even killing animals. Destruction seems a negation of art, but they say it's creative destruction — "like when you burn a picture you create ashes," one explained.

But to justify slaughter of a flock of chickens, more pretentious words are demanded. Said one abortive chicken killer, Ralph Ortiz:

"Destructivist art gives our destructive instinct its essential expression while coming to terms with destruction's most primitive maladaptive aspects — aspects that ordinarily would prove to work for the destruction of the species rather than its survival."

After those words, which seem to mean emotional release for him, the American "artist" looked absurd when the law intervened to prevent the massacre (which, incidentally, was to have bloodied 10 elegantly tuxedoed men as an added attraction).

Ortiz came up with a lone canary but no, not that either, said the RSPCA inspector.

Could he let the bird out the window? No again, for it was a cold night.

The frustrated Ortiz settled for showing a film of a chicken-killing, but not before the coup de grace was administered.

Why not stomp a caterpillar, suggested an onlooker. "I'm not a caterpillar-killer," huffed the affronted artist.

His less ambitious colleagues have fared better. One broke a chair to smithereens. Another created a hole with an ordinary shovel, and promptly priced it at $350.

Ortiz did, however, help axe a piano apart.
In 1996, Raphael Ortiz (he was no longer calling himself Ralph) re-enacted his piano-axing performance at New York's Whitney Museum of American Art... but with one small change. According to NY Times critic Michael Kimmelman, he was now accompanied by "a woman in pigtails and ruffled apron standing on a ladder dropping eggs into a bucket and chanting Humpty Dumpty." 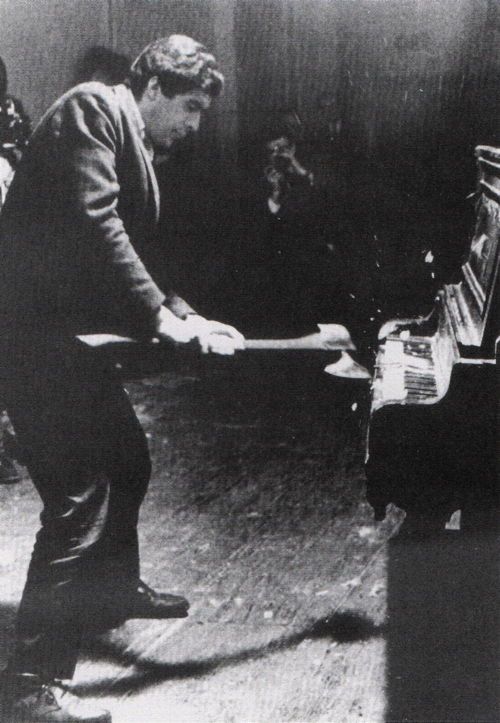 I create art by not creating art.


To paraphrase: "There is nothing that cannot be improved with the proper application of high explosives."
Posted by KDP on 11/17/16 at 02:22 PM
I have a lot of artist friends and some have some unusual tastes in art but it's all creating things.

I have yet to figure out destructive art. KDP is perhaps right the destructive artist need to apply the high explosives to them selves in front of a pure white background. That would get them the desired fame.
Posted by Gator Guy on 11/17/16 at 06:44 PM
Poor Ralph, er, Raphael. He wasn't allowed to kill chickens, so years later he has a pig-tailed assistant smash eggs. I guess that means the chicken came first.
Posted by ges on 11/17/16 at 08:23 PM
I might attend if the pigtailed girl would drop the eggs on Ralphie. That would begin to be entertaining.
Posted by Virtual on 11/17/16 at 10:58 PM
I have finally found a version of "post modern art" that I can fully get behind. I don't have to look at or listen to ANY "Destructivist" art. And THAT is a step in the right direction.

And for CRC above, here's the story of a group that didn't play a note. A bit dated but still amusing.