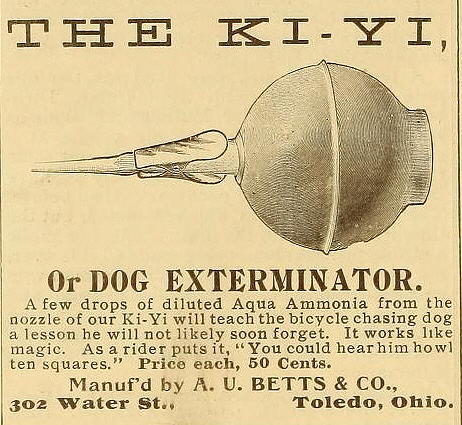 
Comments
I've used a squirt gun loaded with lemon juice on a few, back in the day.
Posted by Expat47 in Athens, Greece on 08/28/14 at 10:21 AM
Spraying caustic chemicals on live animals is not cool! Unless it's bear mace! :lol: :coolsmile:
Posted by Tyrusguy on 08/28/14 at 10:42 AM
My most memorable time of being chased by a dog while riding: As I passed a house on a rural road I distinctly heard two little girls on the porch say, "Get 'im!", so I was ready for the dog as it came running out onto the road after me. Fortunately it was about a thirty pound dog. Not too large. I managed to place the heel of my shoe squarely on the dog's nose and it ran back to the house crying all the way. Those girls had the balls to yell after me, "I'm telling my daddy!"

I circled back around and stopped. I told them to go ahead and get their daddy so I could tell him what they had done. They ran off and nothing came of it.
Posted by KDP on 08/28/14 at 11:46 AM

I'll stick with my level 3 OC stream spray with teargas included. Good for perps and dogs although I've never had a dog I could not get along with including pit bulls. Be safe this holiday weekend WUvians .. we are doing checkpoints here .. don't come through mine drunk.
Posted by BrokeDad in Midwest US on 08/28/14 at 06:05 PM
I carry a can of 10% pepper spray, police type and a 30 inch expandable police baton, ASP. Both are very effective when confronted by dogs on my walks. Even large aggressive dogs get freaked out and retreat when you turn, shout, "GET BACK" and make it clear you intend to stand and fight. They don't like armed and crazy people.
Posted by GatorGuy on 08/28/14 at 07:57 PM
I just ride fast and yell "Go Home" along with various obscenities. There have been 3 times this did not work so well.
Posted by Dave Plechaty on 08/29/14 at 02:57 AM
Ammonia? I got your ammonia sprayer right here! (Please visually an obsene gesture.)
Posted by BHicks on 08/29/14 at 07:28 AM
I had a great-aunt who used to ride an old-timey, round-framed bicycle (picture Miss Gulch in The Wizard of Oz) around narrow, windy, English country lanes. In the basket on the handlebars, she had a house brick and a bicycle pump. The house brick was to correct the driving habits of young tearaways - when she heard one coming around the corner, she would hold it out and wait. While the tearaways didn't much notice the little old lady on the bike, they did notice the house brick they would have coming through the windshield if they didn't get back on their own side of the road. The bicycle pump was for farm dogs. Its handle was weighted with lead shot. When a dog came chasing after her, she would hold the pump by the barrel, snap the weighted handle out by swinging the pump, and fetch the dog a fourpenny one behind its ear, thereby stuffing its nose into the (still moving) spokes. There were never any volunteers for a second round.
Posted by TheCannyScot in Atlanta, GA on 08/29/14 at 08:55 AM
When I was a kid I used to ride around a rural block (aprox 4 miles). There was a dog that used to run out and chase me right before a big hill (going down). I'd build up speed right before the house with the dog and then hit the hill and FLY down it. He never caught me. I'd never have deliberately hurt him but I wasn't getting bit either!
Posted by Patty in Ohio, USA on 08/31/14 at 12:10 AM
A friend and his wife on his motorcycle were following me down this unpaved country road one night. I topped a hill and had to steer between Mama Skunk and her kittens. She had no time to load and cock for me; BUT :lol: 😛
Posted by BMN on 08/31/14 at 12:51 AM
Been there! I too, missed by a hair.

But..... remember those metal mud guards on those 1960ish Japanese motorcycles? The ones that stuck straight back off the front wheel? Well, they also could flip and gut a skunk is less time that it takes to run over one. We threw rocks at the dude when he came back to the garage to clean up.
Posted by Expat47 in Athens, Greece on 08/31/14 at 02:25 AM

I've been chased by dogs, once a bear up in Oregon and now anytime I travel I carry Wildfire pepper spray (gel) its saved me from both animal and human:) in the past, I found some great information on the top brands: https://www.facebook.com/notes/spynuts/whats-the-hottest-pepper-spray/634200049941250 it seems WF is about the hottest on the market, :sick: and has a UV dye that will identify the dog/person if needed.
Posted by Rob Kennedy on 09/07/14 at 04:43 PM
Commenting is not available in this channel entry.