1999: A Taiwanese company came under fire for its "Hitler Heater Ad." The ad for the German-made heater featured a cartoon image of Hitler standing alongside the heater. A company representative explained, "We decided to use Hitler because as soon as you see him, you think of Germany. It leaves a deep impression."

The German manufacturer insisted it hadn't been told about the ad before it ran. More info: Taipei Times - Nov 23, 1999. 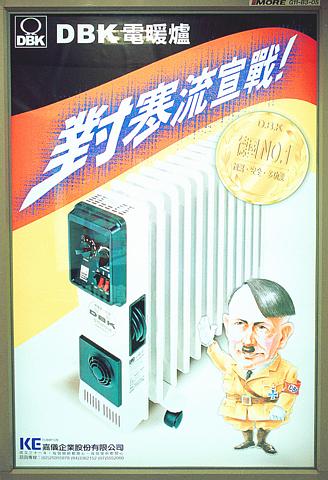 
Comments
If this isn't the world's worst ad, it has to be close. Either that, or it's a deliberate act of corporate sabotage. Notice they replaced the swastika on Hitler's armband with the product logo.
Posted by Brian on 07/12/17 at 06:56 AM
I would put this into the category of cultural bias - since the Germans didn't overrun the countries of East Asia, the name of Hitler wouldn't have the same connotations of conquest and genocide it would engender in those of us in Western civilization. I can't remember where exactly but I believe I've seen a few pictures of businesses in India with the name Hitler emblazoned on the facade.
Posted by KDP on 07/12/17 at 10:57 AM
This makes me wonder -- when we make commercials using Genghis Khan (Coke, Schick Super II) or Attila the Hun (Harvey's Bristol Cream), is that as offensive to people in Asia as using Hitler is to us?
Posted by Phideaux on 07/12/17 at 11:14 AM
AFAICT the Mongols, at least, are proud of what Ghengis Khan achieved, and Attila... I don't think he's at all well known over there. Their equivalent, perhaps, would be someone like Pol Pot, or general Tojo; but I've never seen a Western ad featuring either of them.
Posted by Richard Bos on 07/12/17 at 04:32 PM
Commenting is not available in this channel entry.