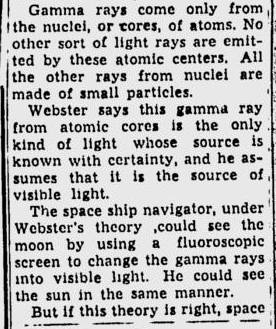 
Comments
I was about to say that Johns Hopkins wouldn't find him to be their best alumnus. But then I saw they graduated him in geology, so I suppose they're in the clear.
Posted by Virtual on 02/17/18 at 07:58 AM
In his defense, a geologist of that time researching earthquake lights might be led in tiny steps, each one quite believable, into a bizarre theory about the nature of light. In a publish-or-perish environment, knowing no one would ever be able to prove him wrong within his lifetime, submitting the theory made sense. Also, if it somehow turned out he was even a little bit right, he would have become immortalized in the scientific world.
Posted by Phideaux on 02/17/18 at 12:08 PM
It may sound quaint now, but a number of hypotheses about the Universe were regarded as law even without proof. One such hypothesis regarded the "aether" that filled the universe, a sort of fluid that filled the spaces between the stars and worlds. Look up the Michelson-Morley experiment - two scientists set out to measure it and failed miserably. However with that failure came about a better understanding of how things actually work and spurred the development of what we now call "Special Relativity."
Posted by KDP on 02/17/18 at 09:01 PM
I'm sort of surprised I haven't seen this particular theory bandied about in Flat Earth YouTube videos. I'd wager I will now...
Posted by PupTentacle on 02/18/18 at 07:08 PM
I've been mulling this over, and, to give Webster his due, I don't think he was entirely wrong.

The nuclear reactions that power the sun do produce gamma rays that aren't visible. But in the 1940s, the way the sun works wasn't fully understood. We now know that the gamma rays are produced in the sun's core, and it takes them about 100,000 years to travel to the surface of the sun because they keep slamming into electrons, causing them to lose energy. And by the time they've reached the sun's surface they've lost enough energy to have transformed into visible light.

So Webster was right in the sense that somehow the gamma rays have to lose enough energy to become visible. He thought maybe it was the Earth's atmosphere causing them to lose energy. But no, it's the sun itself that does this.
Posted by Alex on 02/21/18 at 09:54 AM


I'm sorry, Alex, but he was entirely wrong, and he should have known that. Black-body spectra were understood at least quantitatively since the last half of the 19th century, and qualitatively by the early 1940s. Besides, everything else he says about radiation is also of the genre of "half-understood pop science".

His "theory" makes about as much sense as me claiming that there are no igneous or metamorphic rocks, only sedimentary ones, because we can see it raining down every day.
Posted by Richard Bos on 02/24/18 at 04:36 AM
Richard, I'll grant you that I'm defending a crackpot, but I still think he was right, in a narrow sense.

It's true that the sun is a big, hot object that emits blackbody radiation. In that sense, you could argue that the sun has to give off visible light. But that ignores the underlying question, which is WHY is the sun a big, hot object? What's the source of its heat? And the answer that emerged in the 1920s and 30s was nuclear fusion.

However, a fusion reaction doesn't produce blackbody radiation. It produces high-energy gamma rays, which aren't visible. So Webster was correct in that the wavelength of these gamma rays has to lengthen in order to become visible. What causes the wavelength to increase?

Webster came up with an answer that was pretty stupid, even for the 1940s. But I'm willing to give him some credit for being vaguely aware that the question itself was an interesting one.

I believe the correct answer was worked out by Chandrasekhar, though I'm not 100% sure about that. And it was that the gamma rays bang around inside the center of the sun for tens or hundreds of thousands of years, slowly losing energy, and in that way transforming into the blackbody spectra emitted at the sun's surface.
Posted by Alex on 02/24/18 at 10:06 AM
Commenting is not available in this channel entry.