In 1977, the construction of the Merrill Township Community Center in Michigan was almost complete. However, it was located in the middle of a forest, and no funds remained to build a road to it. Nor was there a parking lot. So the building sat empty, never used, until the roof collapsed two years later during a snow storm.

It seems that Merrill Township eventually got a community center built in a more accessible location. They don't mention the old community center on their website. The ruins must still be out there in the woods. 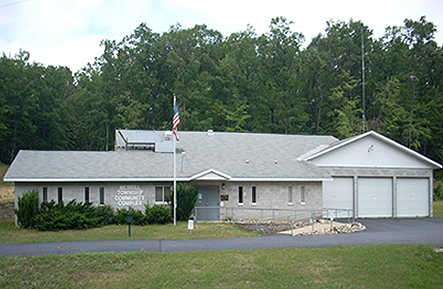 
Comments
A similar federally-funded boondoggle is the "Bridge to Nowhere" that crosses the Mississippi River in St. James Parish, South Louisiana. It's an absolutely humongous cantilever structure that originally lead from a sugar cane field on the East Bank to a West Bank swamp having no highway connection (or vice-versa, of course).

The more official name is the Sunshine Bridge, but that's not related to the concept of the sun shining (public transparency) into darkened committee rooms. It was built during a term of "The Singing Governor", Jimmie Davis, who had a hit with "You Are My Sunshine" and who rode his horse named Sunshine into the Governor's office at his second inaugural.

Contractor: "If I don't need to put in proper roof bracing, maybe 50% kickback."

Councilman: "Fine. Usual split: Mayor gets 25%, I get 20%, and divide the rest among the other council members."
Posted by Phideaux on 02/11/22 at 03:21 PM
On a drive back to home from California about ten years ago I went through Texas and ended up on a four-lane major interstate in the hinterlands. The road went about thirty miles without any towns and the feeder roads at the head and tail ends were small, almost secondary, with two lanes. I wondered, but never delved into who ordered it and how it came to be built where it was. The road was beautiful - smooth like it was poured last week, all the reflector dots were in their proper places and hardly any traffic.
Posted by KDP on 02/11/22 at 05:40 PM
@KDP -- It was sort of like that in Nebraska a few years ago when they were "updating a corridor" (turning a two lane highway into a divided highway with two lanes each way). They broke the whole thing down into sections and worked on widely separated ones at the same time, usually two or three stretches in the middle of nowhere and one important intersection/interchange. It was supposedly to improve productivity, better allocate workers by function, lessen traffic tie-ups, and reduce the load on local resources. But it was odd to go from a narrow two lane which was last resurfaced during the Truman administration, through a bright and shiny new interchange, and then back to the old spring buster.
Posted by Phideaux on 02/11/22 at 09:36 PM
Warren Anderson was majority leader of the New York Senate. The trip from his home town of Binghamton to the state capital of Albany was slow. He pushed for an Interstate and got it. I-88 is named after him. Apparently, it's little traveled and poorly maintained.
Posted by ges on 02/12/22 at 07:31 PM
Commenting is not available in this channel entry.