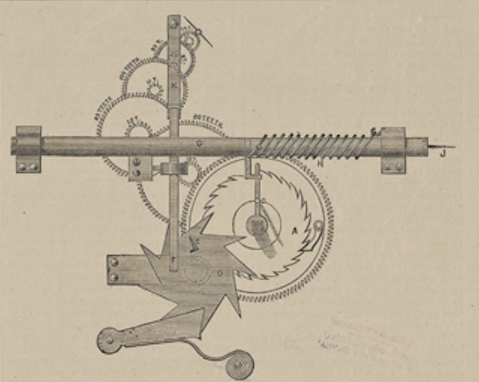 A crime, the like of which the world has probably never heard of, was abruptly disclosed to the world,—causing some eighty deaths by its premature disclosure and a hundred other more or less serious mutilations,—at Bremerhaven, the harbour of Bremen, on the morning of this day week. It seems that a man named Thomassen, whose real name was William King Thomson, of Brooklyn, New York, and who had changed his name to avoid prosecution as a blockade-runner, had conceived the idea in England of insuring for a very large sum, as very valuable, goods which he intended to put on board the German Lloyd steamer 'Mosel' at Southampton for the United States, but to put on board with them a case of dynamite, containing a clock-work machine, which, when wound up, would go ten days silently, and at the end of that time move a lever, which would strike with the force of a hammer weighing 30lb., and so, of course, explode the dynamite, and send the ship, passengers, and freight into non-existence. He intended to take this clock-work to Southampton, and there leave the ship freighted with its unsuspected doom. However, from some want of care, the machine exploded on the quay of Bremerhaven last Saturday, seriously injuring both the ' Mosel ' and a tug. and carrying far and wide,—chiefly among the friends and relatives of the passengers who crowded the quay, —the destruction with which it was charged. Great graves of blown-off arms and legs had to be made, as well as the graves for the corpses of the dead. Thomassen committed suicide, and though not killed at first by his own act, he resolutely tore off the bandages from his wound, and had to be ironed in his bed, where he died on Thursday. He confessed his crime fully to the authorities, alleging that he had got the dynamite from America, and had ordered the clockwork from a German machine-maker.


Comments
The item looks like a homemade drill that became more complicated with every bottle of beer consumed during pauses for thought. Those engineers are a funny lot, eh?

I had the clockwork right, but I thought it would uncork wine bottles on a time delay.

Agent j, a friend once told me the complexity of any project you build in your garage can be evaluated by the cases of beer required. This mathematically corrects for the number of buddies that help out.
Posted by Virtual on 07/28/18 at 11:21 AM

The thing about mechanical clockwork used to trigger bombs was that they weren't reliable enough to be accurate in their timing. A good number of aerial iron bombs used in the Second World War that were rigged with delay fuses to explode some time after impact failed because of damage to the clockwork. You may have noticed news stories where occasionally one is found during construction, just as deadly as the day they were dropped.

A good drama series that dealt with this problem was shown on Public Broadcast Service here in the U.S. during the mid 1970's, titled "Danger UXB."


Posted by KDP on 07/28/18 at 12:35 PM
I guessed a slow clockwork mechanism -- the black line to the right of the vertical bar, at the very top, is a vane used to slow/regulate the unwinding of the spring. That's standard. The rest is a bit of a mystery to me because it obviously is meant to drive the point J, but that would mean expanding the spring. Compressing a spring is far more reliable and useful.

If I had had to guess, it would've been a way to ring a bell at about the same time each day.
Posted by Phideaux on 07/28/18 at 01:34 PM
I don't buy it. It's far too complicated for its purpose. And the article in the paper sounds far too much like an Anarchist Scare story.
Posted by Richard Bos on 07/29/18 at 04:15 AM
Commenting is not available in this channel entry.