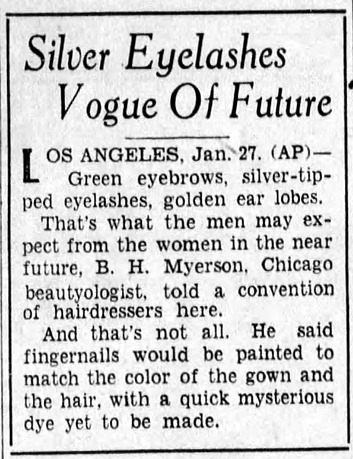 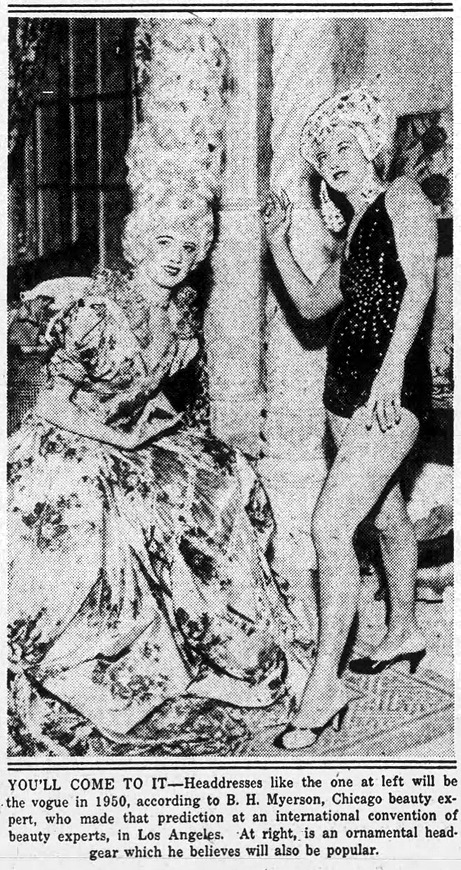 
Comments
That photo is actually the cast of Beach Blanket Babylon from the 1970's. Talk about predicting the future!
Posted by KDP on 07/15/20 at 01:50 PM
Yet another reason it's a shame a story I started writing a few years ago never got finished: it 'predicted' (as much as any story can) that transdermal patches for delivering medication would evolve into fashion statements flaunting the wearer's medical situation.

"The squiggle on her cheek was the same coppery-red as Sil-Ven-5, the latest skin-medicine for syphillis. The silver eschers at her temples were the trademark shape of the most expensive mini-patches for Hepatitis-L. The glittering lumps on her eyelid appliques betrayed the not-yet-perfected blending process which kept MedNow's rabies vaccine off the market, although the more adventurous nightpeople always managed to nick samples from the lab. But I had given her a med-check that afternoon . . ."

It would have been nice to think that 40-50 years from now, when people wear their medicine as temporary tattoos, someone might have referenced me as having come up with the idea. Oh, well. Dying in obscurity was always my best option.


Surely painting the fingertips to match the curtains and drapes was old hat even in the 1930s, and fashionable at Versailles centuries earlier?

Oh, and Phideaux: do it!
Posted by Richard Bos on 07/18/20 at 11:09 AM
Fashion is the one thing that futurists never get right. I remember seeing a publication from 1900 predicting the fashions of the year 2000; they were exactly like the fashions of 1900 (though they were closer to the mark on technology). Then there were all the predictions that people of the “future” would effectively wear spacesuits all the time. And in the 1970s, it was in vogue to say that in the future everyone would simply go nude. Did no one foresee athleisure?
Posted by Brian on 07/19/20 at 10:17 PM
@Richard Bos -- I assume your "Oh, and Phideaux: do it!" refers to my last line of: "Dying in obscurity was always my best option." Don't worry; I'm well on track for that.

If you meant finish that story . . . I just don't see how to overcome the basic flaws. That more or less has to be the opening (it's the narrator's first impression of a major character and leads into how/why he gets involved with her), and it's horrible. The main objection is it's passive voice. I don't feel compelled to always shoot the sheriff in the first paragraph, but 'was,' 'were,' and 'had' is the antithesis of a strong lead-in. Any recasting with action verbs becomes wordy, clumsy, and convoluted. (The jargon (skin-medicine, nightpeople, med-check, etc.) is another major flaw.)

If I was going to go back and try to resurrect a story that died too soon, it'd be the one that begins: "She spent so much time at death's door, she began tending the flowerbed beside the steps."