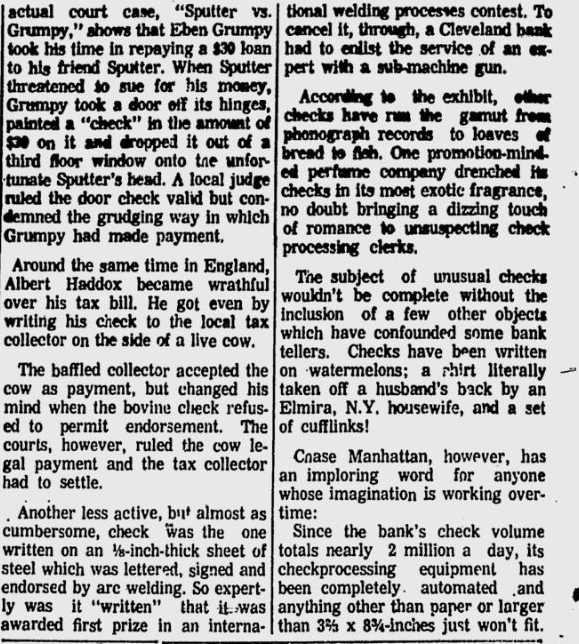 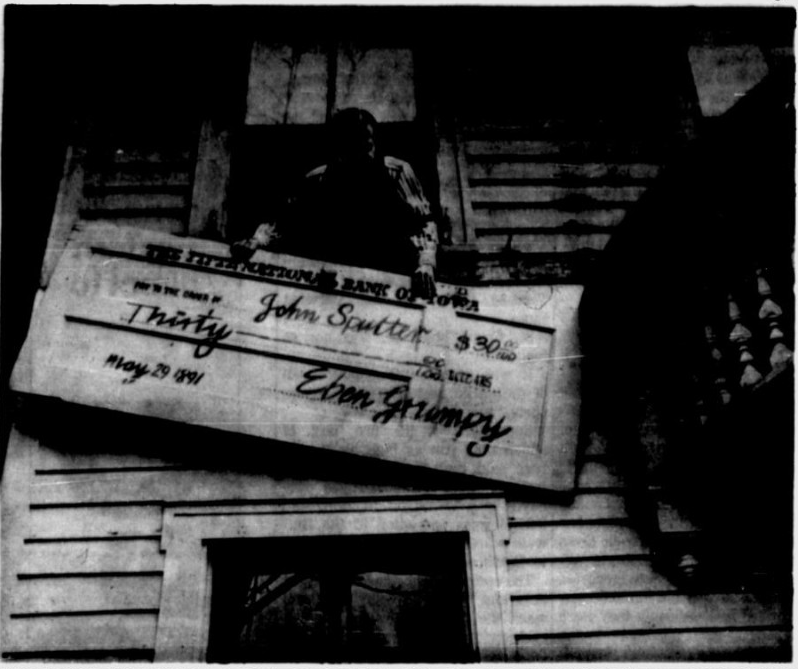 
Comments
Somewhere I read a story about a man writing an alimony check for his ex-wife on the crotch of a pair of women's panties.
Posted by Virtual in Carnate on 12/04/20 at 12:44 PM
I don't get writing a check on a cow. Couldn't the tax collector have had the animal slaughtered, sent the hide to the bank, and kept the rest?

I recently got a check that was only about 4" x 2" and printed on light cardstock. I was a little worried I'd have to deal with a teller and maybe argue it was really a check, but the ATM accepted it with no problem. Yeah for modern technology!

With the revamp of regulations some years ago which, among other things, did away with counter checks, I suspect the standards are much higher these days, requiring magnetic ink, routing codes, etc.
Posted by Phideaux on 12/04/20 at 01:52 PM


I don't get the cow either. The animal itself is worth more than a thousand dollars; the hide alone is only worth forty. Maybe the guy wanted to take care of whatever fees and interests were tackled on his tax bill. However, I'm sure that no one shall begin to destroy a check before cashing it, which means that the cow check had to be processed before being slaughtered.
Posted by Yudith on 12/05/20 at 05:20 AM
Maybe I'm missing something here, but isn't making anything and everything with a name and an amount on it a valid check, extremely amenable to fraud? Both ways?

Way one: I want to take advantage of a vulnerable fool of my vague acquaintance. I take a random piece of plank, write on it "Pay $1000,00 to Richard Bos, signed A. Mutt", put a plausible autograph under it, and cash it. Who is to prove that it isn't genuine? I could copy his handwriting and autograph, crudely, from a letter I once got from him. I'm sure I can make an argument that any differences in graphology must be due to the unusual nature of the writing material.

Way two: I promise some gullible fool of my vague acquaintance to pay him $1000,00 for some work he does for me. None of it in writing, of course! We don't want to awaken the slumbering IRS... I give him a cheque hand-written on a piece of cardboard, he does the work, he goes to cash it in and I dispute the charge. Since I can make it sound plausible that I would never use anything but the official, printed cheques of Bank of Hicksville Incorporated, the cheque bounces; I get my work done for free.

Now, I myself have no such foolish vague acquaintances that I could or would identify, and I don't think I could pull it off, anyway. But I'm sure there are enough people who could.
Posted by Richard Bos on 12/05/20 at 05:32 AM
Presumably then, this check was processed as is:
https://www.gettyimages.co.uk/detail/news-photo/chrysler-corporation-chairman-lee-iacocca-raises-his-glass-news-photo/514704264