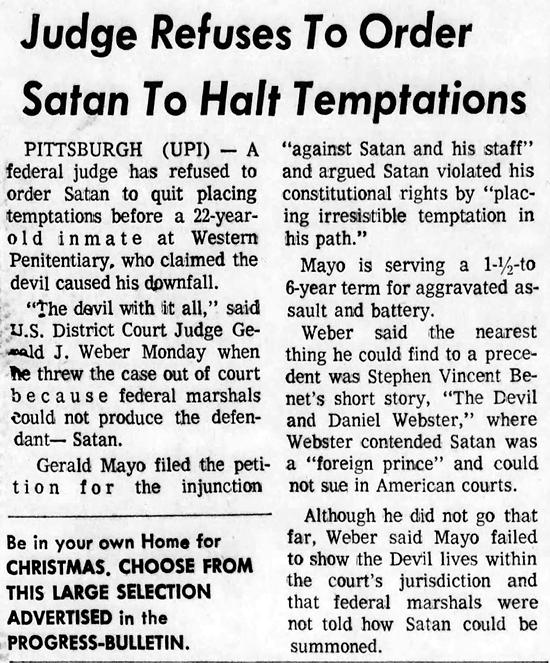 
Comments
On the flip side, when Nebraska State Senator Ernie Chambers sued God, the court dismissed the suit because God could not be properly notified, not having a fixed address. EC appealed, saying: "The court itself acknowledges the existence of God. A consequence of that acknowledgement is a recognition of God's omniscience. Since God knows everything, God has notice of this lawsuit."
Posted by Phideaux on 02/20/21 at 09:05 AM
This was about the time of Flip Wilson as his "Geraldine" character, whining about how "The Devil made me do it!"
Posted by KDP on 02/20/21 at 12:35 PM
He should've pled the suit in Texas. Because, as the joke goes: a Californian and a Texan were talking about their telephone tariffs. The Californian complained about the money it took to call his family in Oregon. "Hell," said the Texan, "for that money, I could've called to Hell and back!". To which the Californian replied that that didn't count, because in Texas, that was a local call.
Posted by Richard Bos on 02/20/21 at 01:58 PM
Commenting is not available in this channel entry.