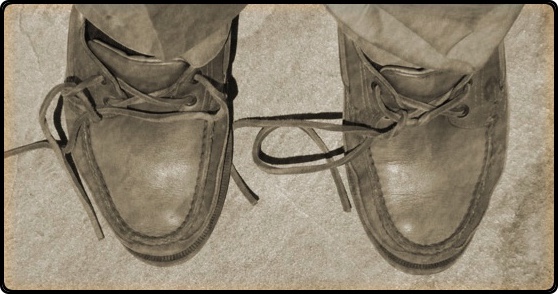 Norbert Elias (1897-1990) was a highly influential sociologist, best known for his two-volume work The Civilizing Process. Among his less well-known accomplishments was his shoelace experiment.

In 1965 and 1966 Elias traveled throughout Europe as a tourist. Deciding to mix sociological research with pleasure, he resolved to find out how people in different countries would respond to him if he left his shoelaces untied. Ingo Moerth summarized the results of this experiment in the June 2007 issue of The Newsletter of the Norbert Elias Foundation:


(1) Spain - Torremolinos 1965 (upper village): In the mostly touristic context of ‘upper’ Torremolinos the loose shoe-laces were sometimes noticed, but never communicated, which Elias explained by a predominantly anonymous Gesellschaft context, brought about by a predominance of tourism.

(2) England - London 1965 (Regent Street, Bond Street): Here Elias conducted three experiments, all of which lasted three hours. He got nine reactions, mostly by older ‘citizens’, as Norbert Elias notes: ‘In England mostly elderly gentlemen reacted by communicating with me on the danger of stumbling and falling’ (in Elias 1967, as translated by Ingo Moerth). This might be interpreted as an established ‘society-context’, where the anonymity is overruled by engaged and experienced citizens watching the public space.

(3) France - Paris 1966 (Champs Elyseés, Boulevard St Michel, Montparnasse): Here Elias conducted three experiments of three hours, but with much less reaction. Only two people communicated directly with him about the visible shoe-lace problem, both sitting in street cafés on the Champs Elyseés, besides a youngster who shouted directly ‘prenez garde’ (‘take care’) into his ear, much to the amusement of the young man’s group of companions. As an explanation of this different reaction, perhaps a different character of ‘public space’ in France may be relevant: mere observation in contrast with engagement and direct intervention, as in London/UK or in Germany (see the following discussion, as cited below).

(4) Germany - for instance Münster 1965: Here the ‘society-context’ mentioned above was – according to Norbert Elias – watched and communicated not by gentlemen, but mostly by women: ‘In Germany older men only looked at me somewhat contemptuously, whereas women reacted directly and tried to ‘clean up’ the obvious disorder, in the tramway as well as elsewhere. Here in most cases a short conversation, comprising more than the obvious ‘shoe-lace disorder’ took place, such as a short warning about what might happen if I didn’t take care of the basic problem’ (in Elias 1967, as translated by Ingo Moerth).

(5) Switzerland: Bern 1966: Here Elias experienced the most elaborate conversation about dangers related to untied shoe-laces, including admonitions about dangers of eating grapes and using trains. He explicitly states: ‘This was probably an exception, from which no conclusion on a Swiss national character can be drawn' (in Elias 1967, as translated by Ingo Moerth).
It would be interesting to conduct this experiment in America. New Yorkers would probably ignore you. In Los Angeles everyone drives, so you'd be lucky if you encountered another pedestrian.