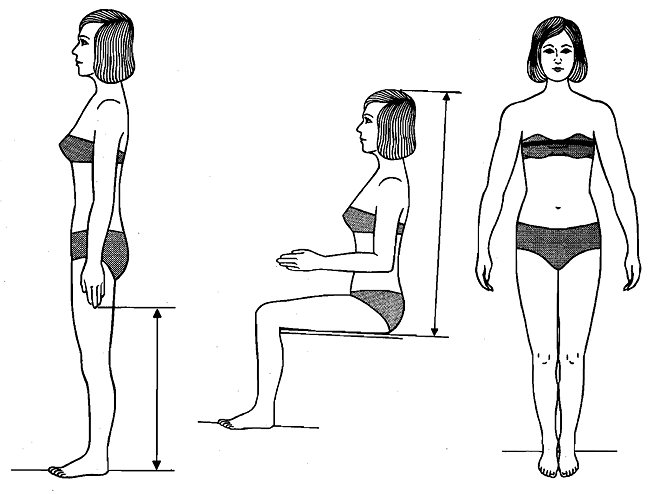 
Comments
Another good idea thrown in the garbage by narrow-minded technocrats. These measurements would still be useful to design seats, air masks, safety equipment, etc. for stewardesses; you just had to make sure the equipment fit the shortest and tallest stewardess (not just the young trainees, but the old work-horse as well) equally well. Such measurements would be useful for public transit, cars, or any equipment or clothing used in the public; just take about five hundred regular users, and adapt the equipment so it suits the shortest, frailest old lady as well as the tallest, fattest man, with a preference not for the medium size, but for the median size. After all, why design a seat for a medium man of 5 feet 8 when most users are women between 5 feet 2 and 5 feet 4?
Posted by Yudith on 05/30/22 at 06:24 AM
If I was in charge (a situation you never want to actually happen), these measurements would be taken from people of every age, sex, race, IQ, etc. etc. etc., ad infinitum ad nauseam. And not just by researchers armed with tape measures -- MRI everyone standing, prone, and in a fetal position.

A recent rabbit hole was the best age to spay/neuter a cat. Did you know a male neutered at two months would be taller? (Early neutering delays closure of bone growth plates.) There has to be thousands, perhaps hundreds of thousands, of similar effects.

Imagine what might be discovered if we had a proper database correlating sizes of body parts with personal histories.

I've always had the notion that people with long index fingers are more likely to be embezzlers, forgers, and scotch drinkers. Perhaps, one day, there'll be the science to back this up.


Sounds to me like just an opportunity for some horndog nerds to mess with girls' bods and find out their marital status. As if anything was going to benefit the design of that jump seat they use. Yeah, right.


Posted by Virtual in Carnate on 05/31/22 at 10:58 AM
I’m assuming the above illustration does not depict the stewardess’ uniforms…
Posted by Brian on 05/31/22 at 01:00 PM
Senator Proxmire was famous for his Golden Fleece awards. This was one and other award winners included:

-Paul Ekman's research that led to the development of the controversial Facial Action Coding System.
-National Institute on Drug Abuse (NIDA) funded project by psychologist Harris Rubin for $121,000, on developing "some objective evidence concerning marijuana's effect on sexual arousal by exposing groups of male pot-smokers to pornographic films and measuring their responses by means of sensors attached to their penises".
-National Science Foundation for spending $103,000 to compare aggressiveness in sun fish that drink tequila as opposed to gin.
-National Institute for Mental Health for spending $97,000 to study, among other things, what went on in a Peruvian brothel; the researchers said they made repeated visits in the interests of accuracy.
-Office of Education for spending $219,592 in a "curriculum package" to teach college students how to watch television.
-United States Department of the Army for a $6,000 study on how to buy Worcestershire sauce in 1981.[4][29]
-United States Department of Commerce (Economic Development Administration) for spending $20,000 to build a 10-story replica of the Great Wall of China in Bedford, Indiana. Begun in 1979, the money proved insufficient and the site is currently abandoned.
-United States Department of Defense for a $3,000 study to determine if people in the military should carry umbrellas in the rain.
-United States Department of Justice for conducting a study on why prisoners want to escape.
-United States Postal Service for spending over $4 million on an advertisement campaign to make Americans write more letters to one another.
-Executive Office of the President of the United States, for spending $611,623 to restore a room in the Old Executive Office Building with gold trim.
-Ronald Reagan's 1985 inaugural committee, for spending $15.5 million of taxpayer money on the planned Second inauguration of Ronald Reagan. (Most of the events could not be held outdoors due to extreme cold. The outdoor events were cancelled in the interest of safety because the noon temperature was 7 °F (−14 °C) with −25 °F (−32 °C) wind chills making it the coldest inauguration on record. Frostbite can occur in as little as 30 minutes in these conditions.
Posted by Stan on 05/31/22 at 11:31 PM
Commenting is not available in this channel entry.