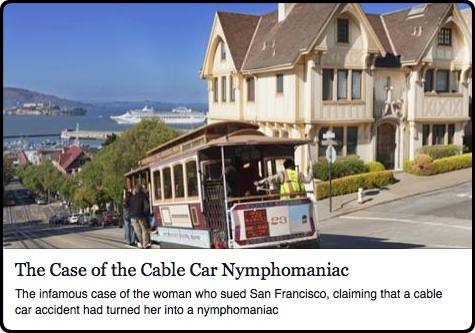 
Comments
Well, everyone told me that I moved to San Francisco 10 years too late. They must have retrofitted them for this problem once I got there. No wonder it was such a hot-bed of hot beds in the 60's, with those contraptions skittering all over the place.
Posted by Virtual on 04/29/16 at 12:45 PM
Who do you sue if you've always been that way?? ; )
Posted by Patty in Ohio, USA on 04/29/16 at 12:46 PM
Hopefully, the musical is titled using one of the references in Alex' article to the headlines from that time, such as "A Streetcar-Blamed Desire".
Posted by Virtual on 04/29/16 at 01:04 PM
I tried looking for any reference to commentary on the case by Herb Caen at the time but I came up empty. Caen had his finger on the pulse of the Bay Area and commented on everything that went on from politics to weird news like this.

We shall never see the likes of Herb again.

Alex, I came across a blog from about five years ago that mentioned Sykes and that she was reported at that time to be in an assisted living facility somewhere in the Midwest. You can take that for what it's worth. Considering her current age would be in the mid 70's it is not out of the question.
Posted by KDP on 04/29/16 at 03:29 PM


KDP -- Sykes would be about 75 now. Makes sense that she would go back to the midwest.
Posted by Alex on 04/29/16 at 06:58 PM
Almost every type of terrain or body of water in nature has it's particular nymph and each has their own name. From Daphnaeae to Echo and Naiades to the Nereids. But... where to cable car nymphs fit in?
Posted by Expat47 in Athens, Greece on 04/30/16 at 01:00 AM
Expat: Unfortunately nymphs were typically named after what they lived in, and the only Greek translation I could find of cable car (the rail kind, not the hanging kind) or streetcar is... "tram", a loan word from English. That would make them tramades, which doesn't sound very mythological. Maybe someone local to you knows a better synonym? Siderodromades doesn't do it for me very much, either.
Posted by Richard Bos on 05/05/16 at 06:08 AM
The modern day one (that takes 2hrs to get anywhere) is called the ELECTRICOS. But the old timey one that was here before WWII my organic Greek translation machine has no knowledge of. lay-oh-fore-EEoh would also be a choice but off by a bit.
Posted by Expat47 in Athens, Greece on 05/05/16 at 10:12 AM
Commenting is not available in this channel entry.