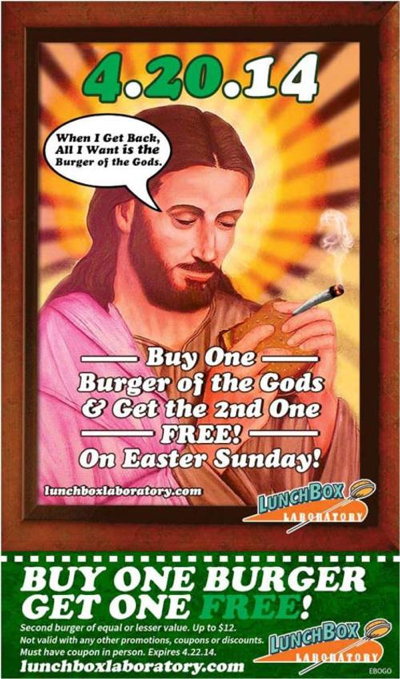 
Comments
This is pathetic, and so is that study reported by the Guardian. The things people will do to get noticed..
Posted by Moses on 04/16/14 at 10:30 AM
The dude HAD to be on something!

There was also a time when journalism was honest and impartial. Those days are long behind us. Put Mohammed on there, see what happens!
Posted by Moses on 04/16/14 at 11:22 AM
It's also Hitler's birthday.

It's cute. It's a little innovative.

If I lived nearby and had never eaten there, I might give them a try based on 2-for-1 and not taking themselves seriously.

Did they use cannabis back then? I don't know. I don't know that it mattered. I read an extract of a diary where someone wrote about smoking hemp flowers with George Washington (yes, that George). It was apparently a common way to relax.
Posted by Phideaux on 04/16/14 at 02:29 PM
"there is a long-standing argument that Jesus and his disciples probably were cannabis users."

That must be why we have the tradition of baskets full of grass and munchies being passed out at Easter. 😛 😛 😝 😜
Posted by Captain DaFt on 04/16/14 at 03:15 PM
I had a feud with a guy who managed the music at a church I attended as a lad. He thought my hair was too long and my attire beneath contempt and didn't hesitate to tell others that I was probably on the road to Hell. I admit that I was no saint - I did burn a little rope once in while.

But one day I had enough and finally told him off. "How come every picture I see of Jesus has him with hair down to his shoulders? Did Jesus shop at Brooks Brothers and wear wing-tips?" I never imagined that the J-man could have partaken in smoking a joint.
Posted by KDP on 04/16/14 at 03:34 PM
Three cheers for the Sun of God ... RA RA RA !!!
Posted by BrokeDad in Midwest US on 04/16/14 at 04:24 PM
Maybe he did partake he certainly drank. Back then Big Pharma wasn't around to vilify weed because it is more effective with less side effects than their super expensive chemicals. Likely they considered it on par with alcohol back then, because it is.
Posted by Patty in Ohio, USA on 04/16/14 at 08:03 PM
Well Jesus was a radical, revolutionary and was not afraid to speak out about social and moral issues of the time including corrupt civic and religious leaders. That why he was removed from the population. I'm sure he enjoyed the pleasures of life then, wine, women and song and perhaps some herb to puff on.
Posted by Gator Guy on 04/16/14 at 08:37 PM
Of course it's offensive - not because of the pot, but because of the Mammon!
Posted by Richard Bos on 04/17/14 at 07:55 AM
Moses, I'm curious when that time was, exactly? Perhaps during the late 19th century, as practiced by Messrs. Pulitzer and Hearst?
Posted by Justin on 04/17/14 at 12:39 PM
I studied in a Christian school and my conclusion was that Jesus was the first revolutionary, probably would have no problem smoking cannabis, but I think he doesn't like to be an advertising image. 😊
Posted by Monica on 07/11/14 at 07:50 AM
@Monica: Never read the Old Testament???
Posted by Expat47 in Athens, Greece on 07/11/14 at 08:38 AM
Commenting is not available in this channel entry.