Regrettably, when Ballet Mécanique was put on in Carnegie Hall, New York, in 1927, the airplane propellers created such a powerful blast that they blew the first-row attendees out of their seats. The concert was a complete and ignominious failure, musically and in composer-audience relations. Hardly anyone believed any sort of "music" had been heard. Both the general audience and the American avant-garde rose up against Antheil. Press coverage was widespread. Mockery mingled with condemnation...

He was labeled a charlatan and was forced to retreat to Europe. All the while, the New York fiasco haunted him like a nightmare. His reputation remained in ruins. 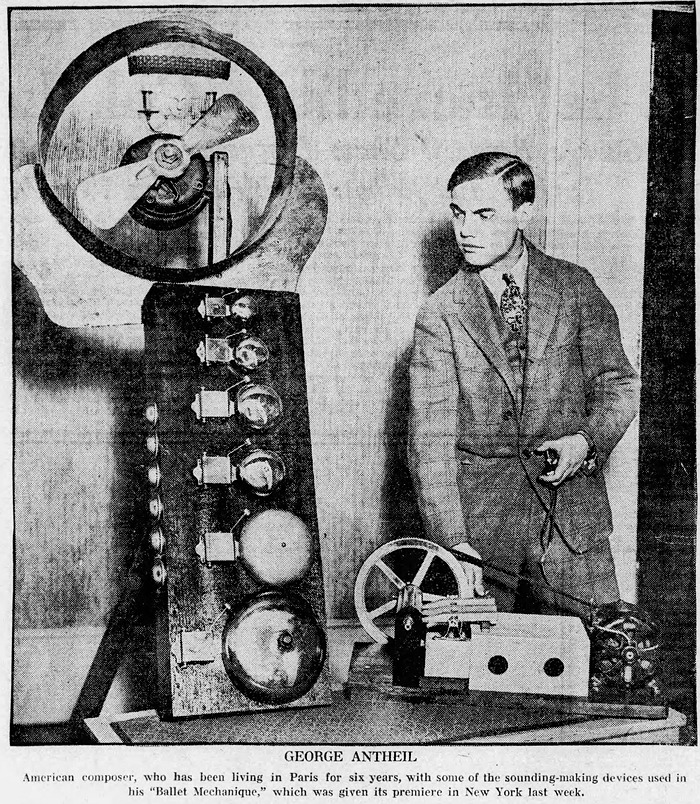 While the inclusion of the airplane propellers provided a dramatic flourish, apparently it was the attempt to synchronize the player pianos that was the real technical challenge, and impossible with 1920's technology. In a 1999 Wired article, Paul Lehrman describes an effort to perform Ballet Mécanique with the help of computer technology.

While over at logosfoundation.org, one can find a description of a more recent project to perform Antheil's symphomy with full-scale propellers... because apparently previous performances, for safety reasons, never used full-sized propellers.

Thanks to Virtual in Carnate for alerting us to the existence of Antheil's propeller symphony.


Comments
Maybe this piece could make a comeback. People seem to enjoy being 'blown away' by a performance.
Posted by Virtual in Carnate on 11/04/19 at 04:45 PM
Again, shades of P.D.Q. Bach!

About ten years ago I picked up a CD box set titled "OHM: The Early Gurus of Electronic Music", covering avant garde composers from 1948 to 1980. While most of the selections are created with various electronic contraptions, some are built with real world sounds recorded and then assembled through cutting and splicing of the tape media. Our featured composer probably could have benefited from these techniques but he was working before the technology was ready. One that I like especially from the box set is from 1948, titled "Etude aux Chemins de Fer" ("Song of the Railroads" is a close translation) by Pierre Schaeffer.
Posted by KDP on 11/04/19 at 06:16 PM

George Antheil and Hedy Lamarr invented and patented a frequency hopping radio system that was the granddaddy of spread spectrum.
Posted by ges on 11/04/19 at 07:38 PM
Commenting is not available in this channel entry.