The creation of William Lane, who envisioned selling them to Catholics who couldn't eat meat on Fridays. Lane also planned to expand his offerings to include Mar-tunies, a cocktail size hot dog, and Sea-lomi, a salami substitute.

It's not clear what became of Tunies. A reporter from Star News speculates that they may have been a victim of the Pope’s decision to rescind meatless Fridays in 1967 (although did the Pope ever weigh in on this issue? Some googling suggests it was actually the U.S. Conference of Catholic Bishops which made this decision, in 1966). Anyway, I can't find any evidence of Tunies being sold after 1962. 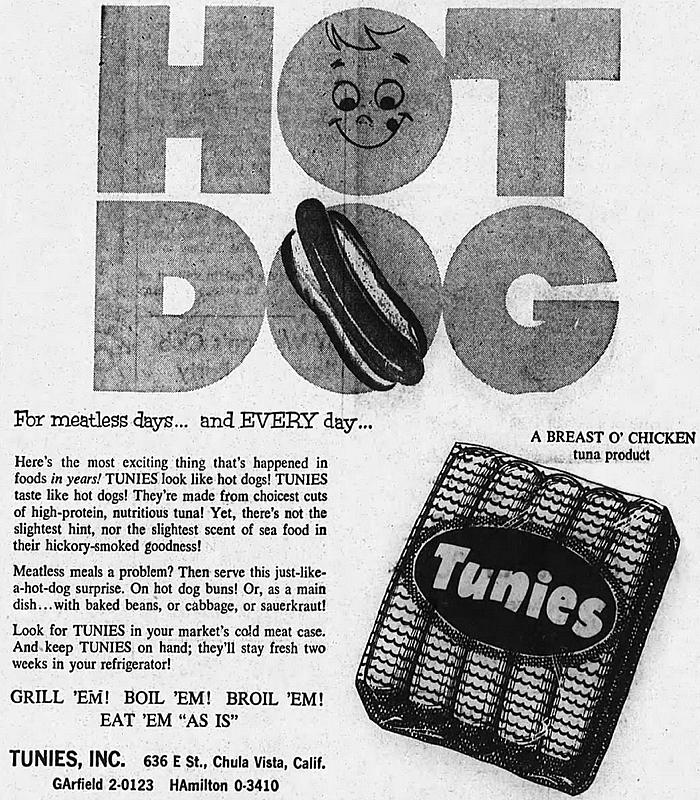 
Comments
Some products made to substitute for another sometimes really miss the mark. It's bad enough that most "hot dogs" are really just the scraps and remnants of the beef, poultry and hog butchering process. Do you really think that the manufacture of Tunies was any different?

BTW - While I do not make hot dogs a big part of my diet, I do like one once in a while. My preferred brands are either Hebrew National or Natham's All Beef. Anything else is just junk, IMO.
Posted by KDP on 11/07/18 at 10:02 AM

You can still find fish sausages in most Asian markets. They're like fish versions of the mexican Fud. They don't appear to be made of tuna, though.
Posted by Yudith on 11/07/18 at 07:44 PM
I found "Tunies" in just three grocery ads in my local paper archives. They sold for 45 cents at one store and 49 cents at another. By comparison for that time, canned vegetables were 10 cents a can, and bread sold at two 24 oz. loaves for 29 cents. Both stores were large, independent food stores in my area, not part of a chain such as Piggly Wiggly, Krambo, A & P, Red Owl, or Sentry, all of which we had about that time.
Posted by Fritz G on 11/08/18 at 06:53 AM
As a vegetarian occasionally people suggest fish based items to me. It is always completely bewildering to me how anyone can think fish is not "meat". It is one of those weird illogical things that people want to characterize as "debate". At least I realized that this nonsense was created through ad copy (and why some people have such a hard time unlearning it).
Posted by Floormaster on 11/08/18 at 12:32 PM
Seeing this ad reminds me of one of the more amusing 'beliefs' of discordians. They really wanted to torment most normal religions, so they suggested that one of the rituals that would honor Eris, goddess of strife and chaos, was to eat a hot dog on friday (probably one mixed with pork), as it would offend catholics (no meat on friday), hindu (no beef), muslims and jews (no pork). I'm not sure if there was someone else they were trying to offend or not. But it was amusing, as is almost anything else you'll find when you look up Discordianism.

Off the top ~ It would also offend vegans, foodies and some dietitians.
Posted by BMN on 11/09/18 at 11:10 AM
Floormaster: because there are people (and more than most full herbivores will believe) who claim to be vegetarian but still eat fish because "it isn't meat". The word "pescitarian" is so new people can't even agree yet whether it should be spelled that way, and sounds to "ooh look at me I'm special" to take seriously anyway. And for people who do follow that diet, "I'm vegetarian" will at least let them avoid the meats they really don't eat.

As for these things: tinned tuna exists and is not nearly as bad as its reputation, as long as you're putting it in, e.g., a pasta sauce and not eating it on its own. Smoked tuna also exists. I see no problem with the idea of smoked tuna sausages.
Posted by Richard Bos on 11/10/18 at 03:32 AM

Richard, they removed all tuna-ness from the tuna to make these, so it's not comparable to canned tuna (tinned to you) or smoked tuna.
Posted by ges on 11/10/18 at 08:45 PM
Commenting is not available in this channel entry.