The holiday season is upon us. So, what better time to experiment with white grub broth in your cooking. Switch out the usual chicken stock for some white grub broth, and see what your guests think. Or just serve it on its own! 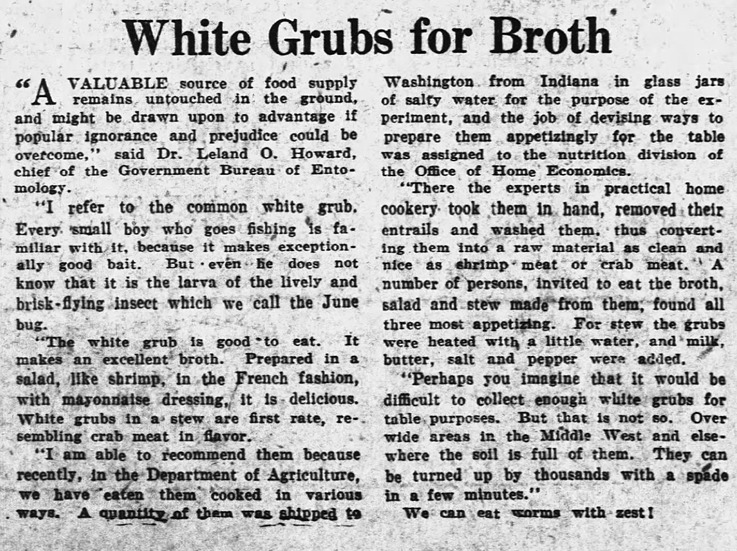 "A valuable source of food supply remains untouched in the ground, and might be drawn upon to advantage if popular ignorance and prejudice could be overcome," said Dr. Leland O. Howard, chief of the Government Bureau of Entomology.

"I refer to the common white grub. Every small boy who goes fishing is familiar with it, because it makes exceptionally good bait. But even he does not know that it is the larva of the lively and brisk-flying insect which we call the June bug.

"The white grub is good to eat. It makes an excellent broth. Prepared in a salad, like shrimp, in the French fashion, with mayonnaise dressing, it is delicious. White grubs in a stew are first rate, resembling crab meat in flavor.

"I am able to recommend them because recently, in the Department of Agriculture, we have eaten them cooked in various ways. A quantity of them was shipped to Washington from Indiana in glass jars of salty water for the purpose of the experiment, and the job of devising ways to prepare them appetizingly for the table was assigned to the nutrition division of the Office of Home Economics.

"There the experts in practical home cookery took them in hand, removed their entrails and washed them, thus converting them into a raw material as clean and nice as shrimp meat or crab meat. A number of persons, invited to eat the broth, salad and stew made from them, found all three most appetizing. For stew the grubs were heated with a little water, and milk, butter, salt and pepper were added.

"Perhaps you imagine that it would be difficult to collect enough white grubs for table purposes. But that is not so. Over wide areas in the Middle West and elsewhere the soil is full of them. They can be turned up by thousands with a spade in a few minutes."

We can eat worms with zest! 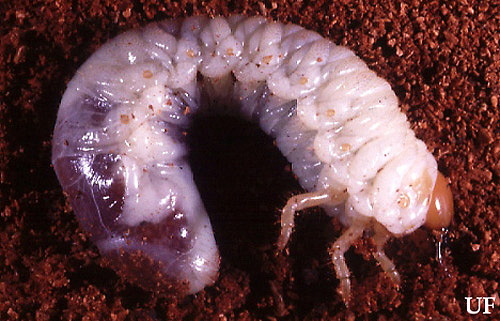 
Comments
Nothing out of the ordinary for an Australian.

Then again, a half-inch jellyfish that can make you beg for death is nothing out of the ordinary for an Ozzie, so I'm not sure that's any criterion.
Posted by Richard Bos on 12/13/19 at 11:02 AM

My mother grew up in an impoverished family during the 1930's and used to tell of going on squirrel and possum hunts as a matter of survival. Although she lived in Nebraska she never mentioned the June Bug as a food source. I'm in Oklahoma now and I see the bugs in the spring - there sure are many of them!
Posted by KDP on 12/13/19 at 08:16 PM
Commenting is not available in this channel entry.