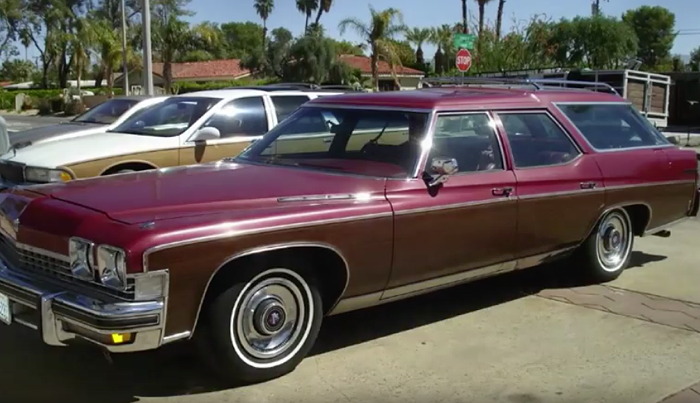 
Comments
Thought for a moment that you had made a mistake, Paul. But having checked wikipedia I found that the Checker Areobus has a curb weight of only 5,302 lbs. It is bigger but is technically a limo. :coolsmile:
Posted by Tyrusguy on 08/22/13 at 08:56 AM
That is a Fisher Body, which was a semi-custom coach works company that Ford / Lincoln / Mercury also used for some of its high end models. When you had a car with a Fisher body you had a near-limousine. Grandpa had a 1967 Ford LTD 2 door and the ride was like sitting on your couch. I think that the Oldsmobile Vista Cruiser used the same basic body with the eyebrow window set into the roof.

The comparison with the smart car is funny, since these wagons actually seated *more than three times as many people* as three smart cars (at least seven, probably 8 total in the wagon with a front bench seat, versus six people in three 2-seater Smart cars).

I wonder how the miles per gallon (mpg) fuel economy works out compared to three smart cars? I wouldn't be surprised if three separate smart cars carrying a total of 6 people got better total mpg than one of these cars carrying 6 people! 😊
Posted by Kyle Morgan on 08/22/13 at 02:06 PM

This site quotes 9 MPG for these monsters:

This site quotes 60 MPG for the Smart Car non-electric model:

The Buick carries its 6 people one mile using 1/9th of a gallon.

And those measurements are made at standard weights -- the Smart Car drops to 38MPG or 41MPG (depending on whose figures you believe) when you add a second person, but the Buick doesn't mind so much (can't find loaded weight mpgs).

You'd have to have 4 Smart Cars to equal one Buick's seating capacity, or possibly many more because the Buick can carry 7 or 8 people *and* nine sacks of groceries or bags of soccer balls and boxes of flags, or the family dog or two, etc..

I didn't run the numbers because there's one variable which would be hard to pin down -- given any particular route, the Buick could reach its destination within the standard margin of error for mpg, but at least one of the Smart Cars would blow the figures due to excessive mileage because only idiots drive Smart Cars, and 1 out of 4 is bound to get lost along the way.
😊
Posted by Phideaux on 08/22/13 at 03:02 PM
Thanks for those further insights, Phideaux. Maybe the Buick has an edge after all!
Posted by Paul on 08/22/13 at 03:37 PM
What a beautiful car! I love those huge old land yachts. I had a 1976 Delta 88 it got crap mileage but it ran great, I still miss it.
Posted by Patty in Ohio, USA on 08/22/13 at 06:59 PM
If we're going down memory lane -- in high school I had 1962 Olds Dynamic 88s. Two tons of car! Anything could beat one off the line, but they just kept climbing.

Fun thing about them -- at speeds over 125, the driver's window would bend outward because of the vacuum created by the airflow, and you could put your hand out while it was still closed!

Mileage was actually very good if you drove sensibly (I know -- I drove sensibly once to test it!).
Posted by Phideaux on 08/22/13 at 07:55 PM
@Phideaux: "because only idiots drive Smart Cars" I beg to differ! Smart Cars are like roaches over here and I've yet to see anything but an idiot behind the wheel.

Pop always bought 'duce-and-a-quarters' (Buick Electra 225). Great cars for eating up the miles.
Posted by Expat47 in Athens, Greece on 08/23/13 at 12:02 AM
My mom had one of these. A veritable 'battleship' of a car! :-O
It met its demise in 1976, due to a head on collision with a 2-1/2 ton milk delivery truck. It's sheer massiveness is probably the only reason I'm still alive and kicking, today. (Long story, tell it to ya some pother time.) 😉
Posted by Johnny B on 08/25/13 at 03:34 AM
1) Maybe the biggest Buick, but Dodge made a car at least equally big: My 1975 Dodge Royal Monaco Brougham Wagon was also 5400 pounds.
If you want a real culture shock, look for the ashtrays. This Buick has them in both rear doors. My Dodge had a large one for driver and center passenger, one in the passenger door, one in each rear door and one in the middle of the front seatback (for the person sitting in the center), and then one for the two seated in the very back to share, despite the fact those seats had onlt enough leg room for a ten-year-old. 😊